By Patrick Salerno of Grave Next Door

It was 1 pm when we left our hotel room, thank God for late checkout; we hustled to our purple van in the ice cold rain. The Grape Ape sat solitary in the parking lot like a faithful dog waiting for its owner.  We had time to kill with our next show being three days away in Oklahoma City. The boys and I wanted to do something fun. My brother Tony and I love old cemeteries, so we asked the waitress about old cemeteries in the area; she informed us of a haunted asylum with tours and we were all excited. We called the haunted asylum and learned that the tours had been cancelled for the month. What a downer. 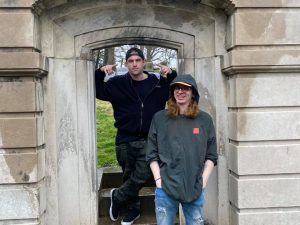 Tony and Kyler, generating some enthusiasm.

We drove through Cave Hill Cemetery in the pouring rain, looking at statues of  angels, weeping mourning women, massive gothic mausoleums, and sky high obelisks as “Riders on the Storm” played on the radio.  Then my brother’s phone went off.   He said, “the Lucky Duck lineup is cancelled.”

We were set to play this festival in Austin, on March 19th at the Lucky Duck. I felt a cringe in my stomach: this is happening, this is real. Everyone was quiet. The nonexistent crowd on a Friday night at well-flyered and promoted gig at usually packed venue came to mind. I was at war with myself pushing negativity down, struggling to stay optimistic. We were all quiet, I scrambled in my phone to the Spiderball 2020 page on Facebook, then back to my messenger to check to see if our booker Buddy Donner from Graveyard Bookings sent anything. We didn’t want to go home. I was angry, but trying to keep it positive.  Were our gigs going to be cancelled? Were we going to playing to empty rooms? We would rather do that than go home — this is what we worked so hard for, this is what we are supposed to do!

As we drove on I saw hundreds of hundreds of small graves of civil war soldiers over rolling hills, perfectly placed on immaculately maintained grounds, in formation as these men had once stood when they were in uniform. I asked my brother to stop the van so I could take photos and video of this magnificent sight. As a veteran I became choked up thinking about the sacrifice of all these men and their lives cut short.

I climbed back in the van, still feeling emotional.  We had tried to set up a house show in Clarksville, TN and were waiting for confirmation, so we decided to head to Nashville. On the way to Nashville, I was on the phone with some contacts there trying to see if we could fill in for any band who had cancelled; I had learned that most of the venues that put shows for bands at our level had been wiped out a week and a half ago by tornadoes! Fuck! Our booker Buddy was working hard on his end to get us a gig.

We arrived in Nashville around 7 pm. The city was vibrant, electric, and teeming with activities, soon to be teams drunken brides wearing their  sashes and tiaras ambling through the streets with their maids of honor stumbling in tow! Countless party busses with thumping club music and dancing, weaved through the streets, women and men dressed to party for the night in the streets. There was even a bicycle mobile bar contraption with women who were pedaling and drinking while they sang, “save a horse, ride a cowboy.”

This was an oasis we had stumbled upon, to see people having fun living their lives, so much activity compared to the doom and gloom that we had been experiencing was refreshing. Walking through a crowded sidewalk of people having a good time was what we all needed.

Our bassist Kyler wanted to get a tattoo, and the tattoo parlor we went to was packed. I asked the tattooist if this was normal for a Saturday night and he said not at all.  Ever since the virus scare his phones had been ringing off the hook. Wow, were people getting ink during a time of crisis? Is this how some people were coping? It just seemed so punk rock to me. I decided I would finally get Ray Pettibon’s  drawing of Black Flag’s My War puppet with the knife on my left forearm because this was punk rock! 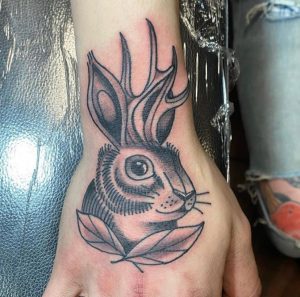 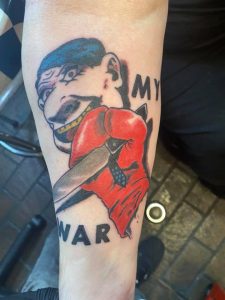 Just then my messenger went off and Buddy had gotten us a gig In Nashville Monday night! Things were looking up. We departed the tattoo parlor with appointments for noon the next day. We were drained and sleep was the only thing on our minds.

At breakfast with my brother, my Messenger went off; we would be doing a house show in Clarksville, TN. This was great since before tour we hadn’t practiced for a week and a half as my brother and Kyler both had the flu. We were a little off at Mag Bar the other night; we generally practice five days a week and we want to deliver the best set we can. A house show is going to give us practice time.

I informed Tony and Kyler that we would be playing a house show — immediately the atmosphere is energetic, and the band’s attitude is positive. It’s what we need: a victory, another battle won in the war.  You might be thinking, a house show is a victory? To Grave Next Door, it is! It might as well be Madison Square Garden because we know at any time we can find out that any of our shows are cancelled — we were still hopeful about Spider Ball 2020. That’s our pilgrimage, our mission, our final objective!

We hung out at a tattoo parlor in Nashville for a few hours; I spent the majority of the time on messenger with Buddy Donner our booking agent. A show popped up in Nashville for March 24th, I just needed to find two more local bands to play with. I spoke to one band who said they didn’t want to play while this health thing was going on and that it was rumored the mayor of Nashville would be shutting them bars down.

As we headed towards our destination, it was announced the Mayor of Nashville wanted to shut down all bars in the city — so there went Monday night’s show at the Silver Supper Club.  We arrived at Kelly Bric’s house, our host of the house show. Kelly is an influencer in the Tennessee Metal scene.  While messaging  a band to play a show with us in Nashville, we mentioned to one band that we were playing a house show in Clarksville; the person from the band I was messaging asked who was hosting.  When I answered Kelly Bric, he laughed  and said that was his mom!

We arrived at Kelly’s house; she was super excited to see us and us her. After talking to her, we learned that she knows her stuff when I comes to metal. Her Tennessee hospitality was amazing, she had went out and bought snacks, food and soft drinks for us. After talking to her we felt a definite kindred spirit. She asked about Spider Ball, I went to the Facebook page and ran down all the bands who were playing. Our excitement filled the room.

Then I excused myself from the table to use the restroom. Upon my return my brother says to Kyler, “Show him.” Kyler holds out his iPhone for me to see…  A post by the Bird Barn that had the awesome flyer for Spider Ball 2020… And a big red anti symbol was over it with the word CANCELLED in red ink. 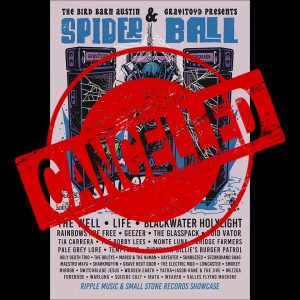 My heart sank. I felt anger, shock, sadness, disappointment… I looked at my bandmates and I could tell they felt the same way. I learned that Austin had placed a ordinance restricting groups  of people no greater than 50 people. The band members alone at this event would have totaled more than 150 people! I sat at the counter of Kelly’s kitchen. I was collapsing within myself; we are a little doom metal band from Grand Rapids, but for us to get invited to this event it might as well been Woodstock or Lollapalooza. It had been out of the Bird Barn’s control, but they were offering all the bands involved and other bands a platform to stream music, merch , content, and more! They are going to go next level!

I thought about the tour we booked around the show, the promotion I did on Facebook, IG, and Twitter. The ads, the posts.  Then I thought, you knew this was gonna happen. Illinois closed its bars and restaurants, Ohio did the same takeout only, it’s only a matter of time until all these other states follow suit. It was like watching dominos fall.  Boom! I just got notified our Oklahoma gig just got cancelled. My heart was sinking even further.

Our gear was loaded into the living room, energetic teenagers were curious to learn about their guests.  Eventually we set up our gear, slowly. I was pissed.  Once set up, Tony let a crunching slow riff out of his orange amp, I started in with a slow pounding angry groove, for twenty minutes we jammed. Two teenagers were in the house for this sound check, their heads nodding, grinning ear to ear. I thought they are the future of rock, we do this for them! This was best I felt in the last two hours, it was cathartic. Our host made us tacos and it was time to play; she’s an admin of World Metal Scene on Facebook and she went live with our performance. We were playing to a small house this night as people were afraid to come out. It didn’t matter Kelly’s house was Madison Square Garden for all I’m concerned. The acoustics in that living room were perfect. After our set we played two new songs for her.

Our host was happy. We stayed up for hours talking about life and music. This was purely a good time. I went to bed tired from this torturous emotional roller coaster the ups and downs of cancellations and new shows, it was like being kicked in the balls every hour.

We had one show left in Arlington with Freedom Hawk, a ten-hour drive from where we were. Would that be cancelled? This band wants to complete every show we had booked that’s still on. No one wants to go home or give up. Kyler was a little nervous about the virus. I talked to him, he said drowning doesn’t sound good. I told him wash your hands you’ll be fine. In the back of my mind, I feel if we keep on moving it won’t catch us. Every time one of us coughs, we look at each other. Every morning for the last couple of days we all have woken up with sore throats. It’s like a zombie movie hoping one among you hasn’t been scratched or bitten. I close my eyes… What will tomorrow bring?

Stay tuned to Alternative Control this week to read more of Grave Next Door’s adventures and check out their merch on bandcamp.  How have you been affected by the coronavirus?  Leave a comment.