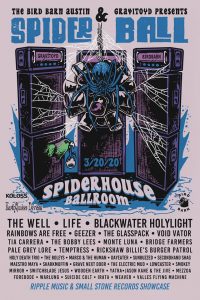 I’m the drummer for Grave Next Door, a doom metal band from Grand Rapids.  At the last minute, we were added to Spider Ball 2020, a unofficial SXSW side festival down in Austin, TX. We were stoked beyond belief. The tour organizer put us in touch with a booking company and last minute they were able to get our band gigs down and back to Texas.   This was all before the world would be in a panic about COVID-19.

Editor’s Note: at the time of this post, March 15th, Spider Ball is still on.

One week before the tour, both of my bandmates had the flu. I was very nervous — what was this going to happen? We left the morning of Friday March 13th; four days earlier, I designed a shirt for the tour with a skull wearing a surgical mask on the shirt. It read “COVID-19 TOUR” “The Show Must Go On” — that was our motto and the general consensus of our band members.  We are thinking, hey isn’t the spirit of Rock and Metal rebellious and fearless? Metal’s image for decades is one of skulls, evil, death, destruction, and defiance!  Our band, road warriors that we are, threw caution to the wind — plus, we did serious research and decided not to succumb to irrational fear, panic, and group think. This was our tour and we had made commitments. We were going to play these shows. 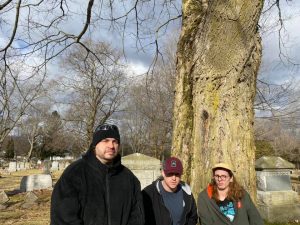 Grave Next Door before embarking on their so-called “COVID Tour” — at an apropos location??

We departed Grand Rapids on Friday the 13th, our purple van dubbed “the Grape Ape” all loaded up. We needed to be in Louisville, KY at 7:00 pm to load in at Mag Bar. Halfway between Grand Rapids we had learned from friends that the previous night’s show had been cancelled and a show later that weekend had also been cancelled.

At 3:05 pm, I called the venue and confirmed that our show was still on — we felt great and that this was a good sign!  We were just a few blocks away from the Mag Bar and we were soaking in the scenery of massive Victorian-era home. So majestic and beautiful, it made me think of Edgar Allen Poe books  and  Edward Gorey drawings. So majestic and dark. We pulled up to the Mag Bar. On the side of the building were our flyers with a picture I had used from the artist Gustav Doré, Death sitting on the moon with his shroud and a scythe. Doré has drawn this for Edgar Allen Poe. It looked perfect on this overcast day.  Outside the bar two patrons we wearing their battle vests and smoking cigarettes. 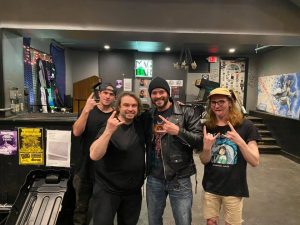 Grave Next Door and an intrepid fan at Mag Bar.

We were loading in when El Bisonte, a two piece prog rock band from Louisville, showed up. We exchanged pleasantries with Blake and Henry, two very cool dudes. We were told that in a few hours that Mag Bar generally fills up on a Friday, but as the night wore on it was evident we were playing for only for a few people. The president that day had placed the entire country in a state of emergency. El Bisonte, the local band played first then split, Grave Next Door played second to a few people, and by the time StormToker played it just my band in the room with them — until they ripped into Sabbath’s “Electric Funeral,” and the patio and bar emptied into the venue room. (Matt Bacon is damn right about those cover songs!)

All the bands said they never saw the room so dead. We loaded our gear, hung out with the dudes from StormToker then left. We pulled into a Waffle House, at first sight it looked like the iconic painting Nighthawks by Edward Hopper, just empty with a cook and three waitress just staring with anticipation and excitement as our big purple van pulled into the parking space.  As we took our seats at the counter, our enthusiastic server told us we were the only customers all night. When she learned we were a band she joked about us setting up and playing in the Waffle House. My bandmates Tony and Kyler looked at each other. Should we do it?  For whatever reason we decided against it.

The night felt like a Twilight Zone episode. As we ate, we discussed whether or not this would be every show on our tour. We couldn’t help but feel a little disappointed but we knew this could happen.  We were only six hours away from home, which is nothing compared to bands  like Throne Of Iron, whose European Tour was cancelled while they were in Europe.  They were lucky enough to narrowly escape back to the States in the midst of a travel ban!

What will tomorrow bring?

Stay tuned to Alternative Control this week to read more of Grave Next Door’s adventures.  What do you think about bands touring at this time?  How are you staying safe from the coronavirus?  Leave a comment.