I’ll admit that it took me about five listens to grasp what was going on in Old Lines’ upcoming album No Child Left Behind. At first, the blend of grind and metal sounded to my uninitiated ears like the din of inner-city third graders descending on a first-year teacher. But finally something clicked – the ferocious guitars and polyrhythmic drums aligned with barking, guttural vocals to somehow make sense, even though I still didn’t know what the fuck the guy was saying.

Standout tracks for me were “Traps,” which you can listen to below, and yet-to-be-released “The Quick Sale.” The album will be available on October 14 through Old Lines’ bandcamp page.  If you like locals Goat Herder and Bad Decisions, give it a listen — not exactly the same, but in the same general area. 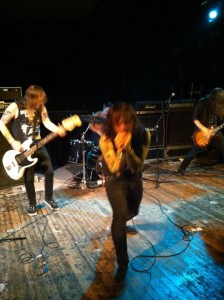 In a strange twist, the reason I agreed to “review” (if that’s what you can call this piece-of-shit three hundred words) is that I saw the band on tour with Cop Problem and was impressed by the intensity of their live performance. The singer was an intimidating-looking dude, had a whole sleeve on one of his arms blacked out, the whole nine yards. He opened one song screaming, “Fuck the police, prisons are for poor people!” (True.) The small crowd was immediately airborne and smashing into each other.

But at around 2 a.m. on September 26, a well-liked off-duty club bouncer was murdered after attending an Old Lines/GBH show at the Baltimore venue where he worked. 35-year-old Tom Malenski was helping a co-worker remove an unruly patron, who pulled a knife outside and fatally stabbed Malenski in the neck. The internet called for justice; the police arrested Nicholas Heath, a man who has been in and out of jail since 2000.

Not sure what it all means, but check out No Child Left Behind when it comes out in two weeks and consider helping Malenski’s family by donating here.