On Friday night for some pre-Cinco de Mayo action, I decided on some very un-Mexican entertainment at the Bear and Grill in Fairfield CT. Me and my fellow Alternative Control associate Johnny Pluckman drove up to see a band that’s relatively new to the music scene here in CT. They’re called Fade to Blue, and after seeing them for the second time (the first taking place at the prestigious Stella Blues venue in New Haven), I can safely say they’re one of the best local musical acts I’ve had the pleasure of hearing. 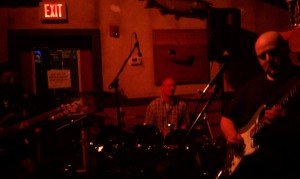 Admittedly, this review has to be somewhat biased. I once shared the stage with half of the Fade to Blue members in previous bands, and have carried on a friendship with them ever since. On top of this, a great deal of people close to me also share this relation. The whole bunch of us went to the Bear and Grill that night to hear some good music, yes, but more so to show support for our friends. This being the second time I’ve seen them though, there was nothing Fade to Blue had to prove to me. I went as a friend, as well as an adamant fan. And that’s a good thing, because the boys didn’t let me down.

First off was the opener. Four guys that call themselves The All Grass Blue Stars gathered on the stage with an assortment of different guitars, and I’m ashamed that I don’t recall the names of all of them. There was no drummer or percussionist present, which would make it seem like the music would have trouble keeping a steady sense of rhythm. On the contrary, the guys played a solid 45 minute set of bluegrass, folk and country with skillful and untiring precision. Bluegrass isn’t usually my thing, so honestly I’m not really sure if they were playing covers or originals or both, but the important fact is they managed to keep my attention the whole time with their excellent finger-blistering melodies and beautiful vocal harmonies. Seriously, all the guys showed immense and effortless talent, and that deserves praise no matter what music you’re into.

After a brief break, Fade to Blue took the stage. They played for well over two hours, alternating between originals, covers and even all-out jams. For me, the immense attraction to their music is simply the amount of both soul and celebration they display. Their brand of blues rock is ripe with passion, professionalism, artistry and casual mood – traits not often found together in a single group, especially a group so new. To explain it differently, Fade to Blue seems to be out both to entertain the people and to exercise personal expression. Michael Kane constructs his solos straight from the heart, uncaring of the heights that they soar to. But at the same time he shows remarkable restraint, knowing when and when NOT to play. This effectively pulls the crowd in while exerting the practice of self-expression. 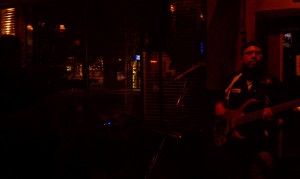 This showmanship and restraint lies in the other members as well. A few times the rhythm section (drummer Jason Geib and bassist Joey Ramose) would break out into an impressive back-and-forth, but would eventually settle back down into a groove before the jam became too noodley and wanky and existent purely for the sake of technicality. And I’m certainly not leaving out Pete, laying down the rhythm guitar with class while showing some soloing potential of his own in parts.

Another impressive aspect of Fade to Blue is their ability to take a song and make it their own.  Songs such as Lynyrd Skynrd’s “Give Me Back My Bullets,” Led Zeppelin’s “I’ve Got a Woman,” and The Beatles “I Want You/She’s So Heavy” were given Fade To Blue’s unique bluesy touch, that made these songs ooze with a lust and spirit absent on the original recordings.

All in all, I’m very impressed with what these guys have going for them. I have a lot of confidence in their future and hope they continue to play around. Too often I’ve seen bands that don’t offer the audience anything unique to grasp onto and remember, and some of these bands have been playing for years! It’s proof that expertise doesn’t always come from experience and longevity, but simply having the right battle plan; a plan that melds musical ambition with stellar performance. These guys have got a plan, and you can help carry it out. So, come out and support!