The night started early, perhaps a bit too early. My plans for taking an hour nap or so before heading to my buddy Danny’s place had failed. We were both a bit beat, trying to suck down a couple of beers to wake ourselves up. The only thing that kept us going was the prospect of seeing Meshuggah and Baroness completely tear up the Terminal 5 stage in NYC. Well actually, Danny admitted to not being much of a fan of Meshuggah’s music, but has enjoyed seeing them live in the past. I (as I’m sure most of you know) am a Meshuggah freak however, and the fact that Baroness was opening up for them pretty much sealed the ticket sale for me. Danny is also a Baroness freak, so there wasn’t any argument from him about going. Tired or not, we knew we were going to have a blast. 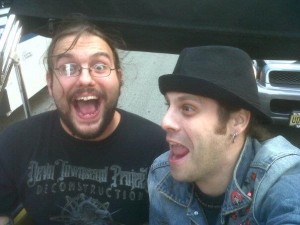 We took a train into the city around 5:30 and we arrived at Grand Central around 6:20, which is just amazing timing. Trying to get anywhere in Manhattan during rush hour is almost futile. Being that Terminal 5 is located right by the West Side Highway, we were faced with a conundrum. The subway couldn’t even take us close to the Terminal 5 location, and getting to the nearest stop would have required a few transfers. Being that the subway was probably like the battle for Helm’s Deep at this time, we didn’t feel like it would be worth it. Hitching a cab is also almost impossible, unless you’re willing to get into some serious fisticuffs with commuters. If pummeling old ladies and business executives over taxi rides is your thing, then I guess you would have been fine.

Then we came upon a stroke of luck! A guy with one of those pedi-cabs came over and offered us a ride. The expense was pretty heavy, but he said he would get us to the venue in no time. Every other option seemed to be unlikely at this hour, so we bit the bullet. Danny and I hopped onto the back of his bike and took a very masculine trip through inner-city traffic. Now before you get all giggly, let me tell you something, we actually had a lot of fun! And this guy was fucking ballsy. He weaved and swerved and pedaled along without any care or acknowledgment of road rules. He zigzagged around lines of cars like they were orange cones on a racing course. It was really quite impressive. Best of all, he got us to the venue right as the doors were opening. Success! 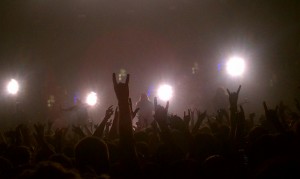 We caught another lucky break when to our excitement, we were able to secure a spot on the back balcony, which happens to be right by the bar. This offered us a great opportunity to pollute ourselves, have a great view of the stage and receive the best sound, being that we were also located right behind and above the sound guy. The first band wasn’t even on yet and we were already sucking down beers and Jager shots. Dear god, this was going to be an interesting night.

The first band on was Decapitated. I admit that I’m not an avid death metal fan, but I still found these guys to be pretty damn tight and powerful nonetheless. The sound was a bit too bass heavy, but the drummer to me was easily the star of the show anyway. I found that they fit well as a Meshuggah opener, since both bands shared a few similar traits. Decapitated was rhythmically interesting, imposing, loud and brutally poignant. I hear that they have a pretty strong fan base, and I can see why. The crowd definitely made them feel welcome.

After a little break and a couple more Jager shots, it was time for Baroness to hit the stage. As much as I love their music and consider myself a huge fan, I really don’t think this tour was the right atmosphere for them. First of all, they’re blatantly different from the other two bands on the bill. Secondly, I swear they only played for about 40 minutes. You really can’t get a great feel of where they’re coming from musically with such a short set. Their music is very diverse, and their live shows consist of full-blown improvisation at times. The tight schedule they were on definitely stole something from the show. Lastly, the sound wasn’t really that great. I’m not sure, but that could have had something to do with the fact that they’re so radically different sonically. Perhaps the sound guy was a bit confused on how to mix it properly? I don’t know, I can only speculate.

Given all that however, they still came on and rocked the house. They got a great reaction and rightfully so. Me and Danny totally geeked out the whole time they were on stage, air-guitaring along to blissfully stoned and stellar solos in “A Horse Called Golgotha,” “Isak,” and their new song “Take My Bones Away” (which they absolutely killed). They exuded a great mixture of carefree rock and roll attitude in their stage presence, and skillful progressive rock sophistication in their performance. I just wish the sound was better and they played for longer. O well, time for more Jager shots! 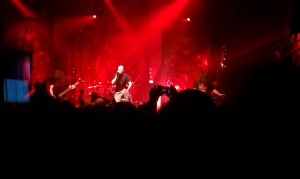 Honestly, by this time I was so drunk that I’m surprised I remember anything of Meshuggah’s set. But I do remember their set, every single second of it. This is now the sixth time I’ve seen this band, and it was by far the best. A steady, slow pulse of heavy distortion introduced them to the stage, and soon after the first rolling riffs of their new song “Demiurge” blasted out and the place went insane. For an hour and a half they completely pummeled the living shit out of Terminal 5. Seriously, the place was shaking. They executed the complexity, power and majesty of their music so tightly that it became almost inhuman. Songs like “Do Not Look Down” and “I Am Colossus” actually sounded better and way more beastly then on the album. “New Millennium Cyanide Christ” and “Future Breed Machine” are obvious fan favorites, and they played them with as much conviction and enthusiasm as they’ve always done. “Bleed” and “Dancers to a Discordant System” are complete musical labyrinths, yet their intricacy was so effortlessly represented that it was almost mockery. I’m sounding like a fan boy, but I’m being incredibly sincere. Even if you aren’t a fan, you owe it to yourself to check these guys out live. They’re simply an incredible force – and that’s not a matter of opinion, it’s a cold hard fact.

After the show, Danny and I somehow managed to make our drunken way into a cab and back to Grand Central. My memory is completely shot by this time, but I vaguely remember us being complete dicks on the train ride back home. I think we might have offended a few people, but I woke up the next morning with no bruises or cuts or sores – so I guess nothing got physical. I did wake up with a massive Jager-style hangover though, and I guess that’s my own fault. But I also woke up a very satisfied young music fan. One of my favorite bands had not let me down, and provided me with tons of inspiration and creative fortitude. I’d gladly sacrifice a few dozen ibuprofen pills for that kind of emotional effect again – minus the late night Taco Bell trip. That was just stupid…