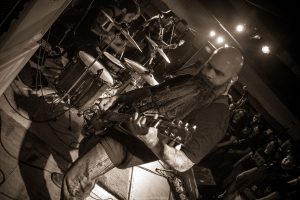 Thanks to an introduction from my photographer bud Julya, I did an off the cuff interview with Kyle Stratton from Atala after their performance at 2019’s Maryland Doomfest.  This was the eighth day of the band’s 16-day, 16-show tour; beginning in northern California (nine hours away from their hometown on the California/Arizona border), their journey took them to Utah, Nevada, eventually to Maryland, and then onto dates in the Southeast, Texas, Arizona, and back home to SoCal.  (Where hopefully they’ve ended up by now.)

In a barren wilderness with a local population of bighorn sheep, scorpions, and mountain lions, Atala crafts their crushing riffs.  Kyle talked about his meditative, acid-enhanced journeys into the desert, the origins of Atala’s cross-country partnership with Connecticut label Salt of the Earth Records, and the band’s new album The Bearer of Light.  Read on for excerpts and listen to the whole interview embedded at the end of this article.

Recording an album start to finish in four days….

“You know how you get that old Robert Johnson album or like an old Hank Williams album?  And that’s like the best stuff because it’s real and it’s one guy and a guitar.  We ended the album, I did an acoustic track live — just me and my guitar, mic on my guitar, mic on my vocals, and that’s it.  I did another little extra, simple guitar overdub and we just left it.  And the reason we left it is because I wanted it to have that kind of quality — where it could stand the test of time, just off of the songs.” 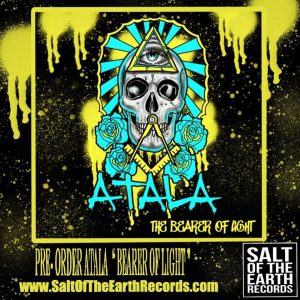 The story behind The Bearer of Light….

It’s funny because I already mentioned acid once, but we’re gonna get right back to it.  [laughs]  It’s basically like, I had an acid trip where I was looking […] internally to find something in myself.  So one time I was coming over a ridge, and I came down and I ran into this herd of bighorn sheep.  It was a herd of bighorn sheep that came around, and it felt like an earthquake.  I was literally ten feet away from the alpha of the bighorn sheep and we made eye contact.  […]  He stood there and looked at me and we looked at each other, and it was the most beautiful moment in my life.  I had a realization that nothing in life matters except for those moments.  […]  Part of the album touches on that — it’s basically all about this head trip, the contemplation of the meaning of life, existence, war….  All these things human beings do that are completely disgusting….  Why are we here?  Why do people do these things?  The album is basically a series of questions with no answers.

Then I tried to convince Kyle that he should read the book Sapiens…  As you can see from the Soundcloud thumbnail, he is really excited to check it out from his local library!