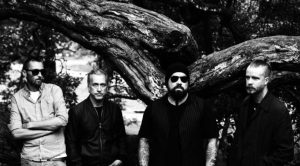 Most well-established experimental bands have two things to worry about. They need to remain artistically fresh, but they also need to appease a fanbase. A group like Radiohead has no intentions of staying in one place, despite the incredible success they’ve had in the past with a sound like Ok Computer. But they still need to keep that success in mind when planning their next move. They don’t want to alienate themselves from their audience and fall from their high place as an experimental band accepted by the mainstream. The same goes for bands like Animal Collective and Sigur Ros. But Ulver is a rather odd exception. They haven’t reached anywhere near the success that the aforementioned bands have, that’s for sure. But they’re still a highly respected group in the experimental community. Every new release of theirs carries with it a great deal of expectation. But unlike most other bands, their fan base seems completely content with whatever direction the band decides to take. They can do virtually anything with their music and be accepted. That’s an amazing amount of freedom to have.

Ulver uses their freedom to its maximum limit. During their 25 year existence, they’ve visited a plethora of musical styles – black metal, Scandinavian folk music, spoken word, soundtracks, ambient scores, drone, electronica, psychedelic rock, chamber music, krautrock and even synth pop. This type of wide fusion isn’t something unique to Ulver alone. Many groups love to try out all sorts of different genres. But Ulver’s success rate with all of these transformations is staggering. They’re absolute musical chameleons, adapting to these reinventions effortlessly. But that doesn’t mean they don’t have an unwavering identity. They use these stylistic changes to provide alternate means of expressing a singular idea. The idea itself can be interpreted differently by different people. I think they’re a band that signals a dark prophecy. They compose the soundtrack to the downfall of our modern culture, set to the sounds of a melancholic spirituality.

This is Ulver’s first venture into electronic music. It was quite an about-face for the band, since every album before this one had at least some resemblance to the heavy metal sound. It’s a soundtrack to walking through the city at night, with all of the romance, danger and sleaze that comes with it. Each musical piece is predominately instrumental, sliding and morphing and fading in and out of one another. The band weaves together dark and mysterious urban inspirations like cool jazz, trip-hop, techno, industrial, dark ambient and spoken word poetry that ranges from sexy to ominous. The last track “Nowhere/Catastrophe” is a departure from the rest of the record, written and sung in traditional song format. The lyrics are wild and apocalyptic; the music is spacy and jazzy. The record ends on a strangely unsettling note.

Shadows of the Sun

This is Ulver’s foray into chamber music. It’s a very mellow and sad record that occasionally morphs into moments of deathly noise and cinematic drama. Its most prevalent feature is its deepness – in its emotional severity but also in its tone. “Vigil” is an immense and moving dirge about dying, beginning as an ethereal piano/string ballad before deteriorating into a wash of distorted drones. “Funebre” is a creepy bit of medieval poetry and foreboding piano. The theremin takes center stage here, whining out a harrowing solo. “What Happened?” is a devastating closer, ending with a looping string section that’s filled with an incredible amount of sorrow. Each pulse of the violins feels like autumn leaves caught in a sudden gale, blown against me, stinging the skin with their stiff, frosted ends.

I like to call this record’s sound as “whatthefuckadelic.” I seriously have no clue what to call this sort of sound, since it’s nothing like anything I’ve listened to before. It’s an avant-garde record that seems content to throw everything at you in its 45 minute running time. But after lots of listens and lots of patience, the overall musical foundation becomes clearer. It’s a monstrous elixir of gothic rock, electronic music, prog and sample-based collage. The songs here are twisted, ghoulish, self-destructive and bombastic. Garm’s vocals are drenched in digital manipulation and all the instruments are melted into the same electronic gas. It’s an explosive gas, expanding and contracting at unpredictable moments. I love every second of it. The lyrics preach surrealist messages about Christianity, medical trauma and death, giving the record a strange hospital-as-a-place-of-worship setting. Awesome.

It’d be wrong not to include a black metal record on this list. Ulver was a very important band in black metal’s second wave, and this album turned a lot of heads with its unrelenting viciousness and incredibly lo-fi production. The record was recorded on a 4-track, each instrument blaring with ear-splitting amounts of treble. But the shitty production value does give the record a strange and fearful atmosphere. The music sounds otherworldly and distant, its harshness offset by an eerie shell of impenetrable haze – like listening to the bowels of hell behind a thin door. The music is blisteringly fast, nasty and abrasive. But the band’s solid understanding of melodicism not only saves this album from being too one-dimensional, it raises its spiritual value to something that’s tremendously epic and absolutely evil.