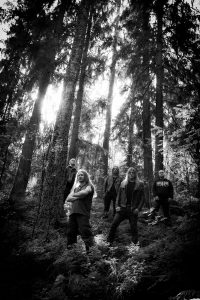 Glowing praise needs to be stated for a band who never seems to be confused about their musical direction. I’m not talking merely on an album to album basis, but song by epic song. For a band who defines themselves on ambitious pieces of Viking metal of exceeding song length, Moonsorrow’s track record is almost fucking perfect. In fact, they’re genius instrumental storytellers. Every section of music builds on the section before it, recalling musical motifs and building on repeating themes to spectacular, almost emotionally exhausting results. Seriously, they’re one of the only metal acts that have moved me to tears.

Not to take anything away from other folk and Viking metal bands. Ensiferum certainly bring the heavy, and Finntroll bring the drunken fun. But Moonsorrow is so far past them in terms of composition. It isn’t strictly due to the fact that they have a number of 10+, even a few 20+ minute songs in their catalog. It’s because they write these epics without a single moment of filler or waste. There isn’t anything overtly showy about their technicality, and they don’t resort to static movements of ambience to make up for a lack of ideas. But they do have an unwavering hold on proper dynamics, cinematic grandeur and Scandinavian folk music tradition, combined into conceptual albums of exhilarating adventure.

To break down their process somewhat simply: They’re all about the grand purpose of each movement – where is the song ultimately leading to and how can they get to that climax gradually, slowly building drama and tension along the way. O they take their time here and there. They don’t want to hand you that melodic gratification right away. But when they get there, no one else in the progressive genre can touch them.

Moonsorrow demands a lot from the listener, at least at first. Even though in my opinion they’ve never made a bad album, the scope of their music can be intimidating. Here’s a four album introduction for new listeners.

This album’s grand and triumphant elation can easily be interpreted as being a little too cheesy. The bright and cold sounding synth work doesn’t help to subdue the pomp either. But this album is still undeniably fun to listen to. It has a marching exuberance, a pagan winter magic and heaps of Scandinavian lore. The structure is easy to grasp, the aggressive moments are boastful and the balladry is quite pastoral and celebratory. It’s a great record to just jam along with.

This is a somewhat darker album, with a much more aggressive approach to the triumphs of Kivenkantaja. The sonic world created still retains that dazzle of melodious brightness, but the riffs tend to keep rolling along the dismal land beneath those glimmers of hope and glory. Harsh vocals take over the spotlight and the general mood here pervades an epic melancholy. But instead of wallowing, songs weave the doldrums into mighty anthems of sadness.

This EP consists of one 30 minute song, plus a couple of rerecorded older tracks and two cover songs. I pretty much ignore everything on the disc besides the 30 minute track, because I feel like the record would overstay its welcome after such a gargantuan musical story. The song itself is highly conceptual, separated into nine distinct parts punctuated with spoken word narrative. I have no idea what the story is about to be honest, but the music tells its own multifaceted epic. Black metal blitzes, acoustic jams, emotionally-charged doom metal swings and power metal victories are all featured on what could be the perfect song for any Moonsorrow newcomer to start with.

I’ll spell out of my favorite metal albums ever very simply. This disc is two incredible tracks, one over 30 minutes and the other around 26 minutes long. It’s a very turbulent record, with clashing dramas of massive pain, war and destruction juxtaposed with tear-jerking optimistic stubbornness, pagan heroism and the rigidity of fight against a profound and divine grief. Okay, so I lied. I can’t explain what this album means to me without becoming some poetic loon. But it’s hard to explain in analytical terms a piece of music that waters my eyes and chills my spine every time I listen to it. It’s music I think every metal fan needs to experience. And I don’t mean put it on at work or in your car or at a party. Clear your schedule, sit down in a dark room, turn it up and let it pound your fucking senses. It’s a work of genius.