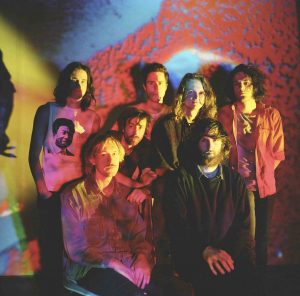 King Gizzard & the Lizard Wizard. It’s an Olympic band name that such a huge band deserves. They consist of seven members – three guitarists, two drummers, multiple vocalists, bass and a guy who plays a mean harmonica. They’re also huge in terms of popularity, recently selling out every date on a headlining US tour. They broke out of their home of Melbourne, Australia a few years ago and seem to be on the fast track to glory in the rock and roll underground. It’s easy to see why music fans have taken to them. First of all, they’re incredibly prolific for such a young band. They’re about to drop their eleventh album later this month and their output only stretches back six years! They’re also an exciting live act, their shows rampant with the energy of a punk show, the sensory stimulation of psychedelic rock and the volume of heavy metal. They’re a band that effortlessly crosses those stubborn musical boundaries between indie heads, metal heads and prog nerds, bringing everyone together under a large musical umbrella that I guess you could call psychedelic garage rock.

Although the band has a constant need of experimentation and reinvention, there are some aspects of their sound that remain steady. First off, the production quality is pretty lo-fi. When listening to one of their albums, one gets the feeling of listening to a worn cassette tape or a scratchy vinyl. Although there isn’t any tape hiss or vinyl crackle in the actual recordings, the music sounds rough, worn, fuzzy and drenched in a kind of audial fog. Though this may seem like negative traits, the band is clearly going for something quite nostalgic and retro. The lo-fi quality is heavy with analog 1960s drug craze. Their entire discography could fit in with the early days of reel to reel rock and roll quite harmoniously. Yet even if the sound quality feels somewhat messy and amateurish, the band is far from imperfect in musicianship and creativity. King Gizzard can blow through mighty improvisational jams, punk rock riffs, prog rock flourishes and acoustic ditties without moving out of their comfort zone. Any and every genre is up for grabs, which gives the group a great deal of unpredictability. Their music isn’t metaphorical, political or spiritual in any sort of constructive sense. They live to make music that’s entertaining, welcoming, silly on the surface, eccentric and maybe a little self-indulgent. And that’s fine by me. I really don’t need another social or political opinion infiltrating my music.

I’m In Your Mind Fuzz

I find this to be a good place for newcomers to start. It mixes the band’s softer and harder traits with equal measure. The musical suite that stretches across the first half of the album provides a variety of blues rock, psyche, go-go, and riffage that could’ve been lifted straight out of a secret agent film. The second half of the album is slower, groovier and spaced out. Songs like “Hot Water” and “Satan Speeds Up” put Pink Floyd’s Dark Side of the Moon and The Beatles’ sound experiments like “Revolution 9” in a blender. The music just oozes with disorientation and weariness.

This is Gizzard’s acoustic album. Practically everything about the album is unplugged and maybe a little unhinged. It’s a cute, summery album full of butterflies, sunflowers and psilocybin mushrooms. It’s a puffy cloud/blue sky collection of songs that draws from folk rock, country, chamber prog, and of course late 60s psychedelia. Try this one out if you’re looking for something a little tamer and quieter.

As this title suggests, this is the band’s foray into the world of microtonal tuning. The experiment works. Each song here has a semblance of Middle Eastern spice and stoner rock drawl. “Rattlesnake” is a krautrock jam, propelled forward on a motorik drum beat and peppered with ghostly sound effects, sparse and bright synth notes and strange Arabic leads. “Doom City” is like a rockabilly Black Sabbath song, alternating between a rustic doom metal dirge and a finger-snapping verse line. The arrangements here feel sparser and perhaps a bit more disciplined than a lot of their other works, but it still brings a great amount of color and melody.

I actually gave a synopsis of this album in my personal top 20 of the year last December. It might be my favorite of King Gizzard’s albums so far. It has an incredible energy, sometimes verging on the fringes of heavy metal and hardcore punk. Lead vocalist Stu Mackenzie screams, howls and hoots throughout the album’s duration, adding to the anarchic, wild booze party feel of the music. Every song swings seamlessly into the next. In fact, if you put the album on repeat, you’ll find the last seconds of the last song loop right into the first seconds of the first song. This gives the whole work the impression of being in a constant loop. You could practically play this album over and over forever and the party never stops! The record is a lot of fun, technically impressive and a one-of-a-kind experience. An essential listen for any rock fan!