Cardiacs is what happens when worlds collide. Who would have thought that two completely separate rock subgenres with two entirely different musical outlooks would ever be able to work together? This band found a way, and the results are very exciting. Although bandleader Tim Smith will never admit to it, Cardiacs is the first (and maybe only) progressive rock punk band in existence. Fans have even made up their own subgenre for the band: pronk. 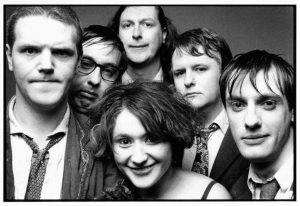 Cardiacs has flown under the radar for practically their entire career, and it’s not hard to see why. Their music is hyperactive, cartoonish, unpredictable and childish. It would sound like complete nonsense if it wasn’t also so damn sophisticated. They’ve got the chops of a jazz ensemble, composing multifaceted and melodious workouts with the adventurousness of a symphony. But they also have attitude, perversion and a blatant disregard for rules. Nowhere else does a band make the marimba, recorder and synthesizer convincing vehicles for punk, and no one but Cardiacs can make a pure circus out of prog. Mr. Bungle, I love you…but eat your heart out.

Unfortunately, due to ongoing health problems the band hasn’t been active in years. At the moment, the only way to experience Cardiacs is to check out live footage online. YouTube was my introduction to the band, particularly the song “The Duck and Roger the Horse.”  One play of the video was all that was needed to convince me that they were whacked out of their gourds. Besides the band’s virtuoso musical ability, they have a knack for theatrics. Their show is a hodgepodge of rock and roll posture mockery, childish rants and even in rare cases, physical abuse. All the while they keep the musical performance tight and disciplined, sparing none of the wankery – quite a feat for a band who could have been so easily distracted by their antics.

The band’s penchant for theatrics carries over to their off-stage antics as well. The band acts out a peculiar concept that involves a fictional record company called The Alphabet Business Concern. It is perpetuated that this organization owns the band and their music, and exerts their authority in strict and degrading ways. It gives an overarching, almost political satire to the band’s child-like behavior, which enhances their own folklore.

But none of these strange customs would have any effect if the music wasn’t equally strange and spectacular. The band flirts with all sorts of musical genres effortlessly, including synth pop, jazz, ska and minstrel music. And they wrap up all these various influences in a brightly and colorfully packaged jack-in-the-box of songwriting. Tracks bob and bop back and forth, spring out with musical surprises and can sometimes create a musical uncanny valley by mocking the sophisticated musical expectations of progressive rock, leading to a listener’s revulsion or glee. It all depends on how open you are to the silliness and stupid fun of it all.

All four of these albums display different sides to the Cardiacs’ personality, and all of them can be considered rightful introductions to the band’s music. It all depends on how crazy you want things to be when you dive in.

Out of the four choices, I feel like The Seaside is the easiest and friendliest way to familiarize with the band. The album does feature the band’s usual carnival-like flair, but the real case of the crazies is suppressed by moments of traditional 1980s pop and new wave punk songwriting. Throughout the album’s duration, accessible earworm choruses and singalongs invite the listener into their wacky world, instead of trying to overwhelm. But that doesn’t mean the album doesn’t have its share of insanity. “Hello, Mr. Sparrow” is a highlight, featuring comedic horns, start/stop transitions and a calliope styled chorus.

A Little Man and a House and the Whole World Window

As far as album length is concerned, this would be a good place to start for those who don’t want too much too soon. Its reasonable 45 minute length and relative tameness compared to other releases makes it relatively digestible. But this album also features a lot of progressive rock influence, featuring a good deal of symphonic lavishness, weird medieval influence and a bit of progressive pop bombast. So those not equipped with a love for prog might want to start somewhere else. But the album is still a lot of fun to listen to, and even provided the band with their only charting single, “Is This the Life?”

On Land and in the Sea

This was my introduction to the band. In ways, it stands as the band’s peppiest and happiest release. The album has tons of light-hearted nursery school choruses, giggly guitar rants and stupid catchiness. But there’s also just enough anger and boldness to make it sound like each song is either one side of a lover’s quarrel, or a jaded teenager’s monologue. There’s also a perverse darkness that shows up here and there that reminds the listener that the band remains unhinged and anarchic at heart. “The Duck and Roger the Horse” is a good example of just how aggressive the band can get.

If you really want to jump right into the crazy, Sing to God is a 90 minute trip into pandemonium. Every aspect of the band is magnified here to the point of sheer lunacy. The hyperactive punk and metal parts are like a sugar rush heart attack. The cartoonish parts are like a schizophrenic’s speed painting. The unashamed grandiloquence in these songs is like a heavenly hose of ice water to the head, intensely spiritual to the point of agony. Just listen to the apocalyptic and angelic “Dirty Boy”. It’s sickeningly glorious. Even the production here feels like it’s won the loudness war. The wall of sound is an amorphous exoskeleton of exposed nerves and everything hurts, tickles, and titillates to the highest register. The album is a monster, but it’s one that leaves a very lasting impression. For me, it’s an absolute masterpiece.