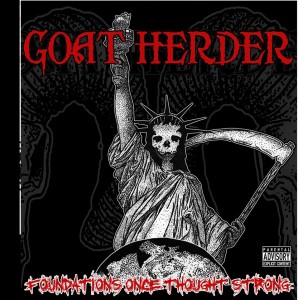 When I agree to a review, it’s always refreshing when I don’t feel pressured to be genre specific. Goat Herder took that stress away, because honestly, I don’t feel confident in pigeonholing them into a set musical placement. Okay, it’s definitely abrasive music. But damn, there’s just enough melodious treatment in their licks not to label them as some kind of noise rock act. There’s simplicity in their songwriting, but it’s a bit too meticulously mapped out to be punk. There’s a grittiness and a bit of a psychedelic treatment to their sound, but it’s sometimes a bit too steadfast and angry to be stoner metal. So what the hell is it?

I mean, who fucking cares what it’s called, really? Too many people rely on genres to give them some kind of comfort in what they like and listen to. It’s almost like agreeing to be part of a clique. For me personally, not labeling music gives me an incredible freedom. I can make up all kinds of crazy analogies to express what this sounds like and how I feel about it. I can say things like, Goat Herder sounds like getting a lecture by a meth addict homeless man while hitching a free ride on a runaway boxcar train. Goat Herder’s album “Foundations Once Thought Strong” is like your slightly insane war veteran grandpa making a stand at your family dinner table about how all his children and children’s children have always been fucking scumbag assholes while they try to enjoy a final feast on the eve of chemical apocalypse. But you people probably need something a little more streamlined than that, I guess.

Basically, FOTS is music for people that like their music loud, energetic, sour, maddening and stoned. If you favor any of those categories, then there’s something here to like. I personally enjoy Goat Herder’s penchant for fuzz and feedback. It adds a whole other dimension to their music. It’s like a noise portal that occasionally opens into chaos. Their unpredictably means that I won’t get bored, and the short length of the album means I can easily put it on for a repeat, which I did. The production is rather lacking, but given that this is a local band review, I understand that most of the reason for that is having a tight budget, so they get a pass on that one. The lyrics in the booklet are printed in a stream-of-consciousness manner, which supports my previous analogies. I’m listening to some crazed maniac yelling about how the world has gone to shit. The world probably IS going to shit, and I recommend Goat Herder as a soundtrack to the inevitable downfall of everything. 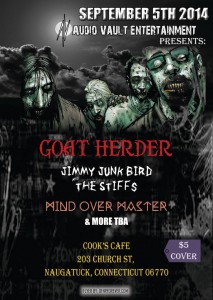 P.S: The Goat Herder sticker is going on the back of my laptop. My laptop is fucking small, so if you guys are reading this, you should be honored to make it there. I don’t have a lot of room left. Next stop for Goat Herder: Madison Square fucking Garden!

See Goat Herder live at one of their upcoming shows…