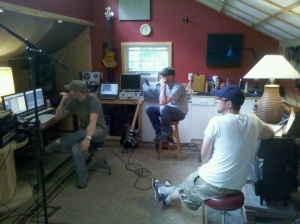 Beijing in the studio.

Every so often, it’s time for a random music column. Here goes:

New Haven rockers Beijing sent Alternative Control their EP to review — see, Twitter is good for something after all. It’s Not So Simple was recorded this summer, only months after the band formed. To be honest, I’m hooked. “Glitch” and “Hands in Front” gave me serious nostalgia for the days when I laid on the floor for hours listening to the Foo Fighters and Weezer. In fact, the moving vocals paired with “My Name is Jonas” guitar tone makes me want to crack open a beer and dance around my bedroom right now…

Download your own nostaglia fix at Beijing’s site, either for free or for $3.96. (Your choice!) You can also catch Beijing in real life at Daniel Street on 9/14 with Sneaky Castro and Skratch Happy. 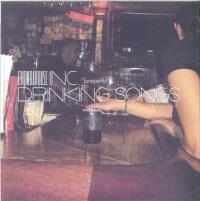 Another local album that’s come across our metaphorical desks: Drinking Songs, a compilation of Danbury-area music released by Chowda House Records this July. Standout tracks include “Down and Out” by Don Ryan, “Carry Me Home” by Brenton Vaughan, and “Just an Old Cowboy” by The Durge. I was also a big fan of “Give It To You Good” by MC Sex Scene and Homeblind, and blasted it all summer while driving around with the kid I was babysitting. Hopefully he won’t ask his mother what “getting done like this in front of a mirror” means… BUT ANYHOW… Drinking Songs is available for free download unless you can locate an elusive hard copy.

Now the local metal update: Lightsbane, No Remission, Cyperna, and Bonded Through Hate are playing this Saturday (9/3) at Cook’s Cafe in Naugatuck — should be a sick show. Rack n Roll in Stamford has a new booking manager; hopefully he’ll tolerate, er, enjoy Pink Missile as much as the old manager did. We’ll see if “Baldwin’s Birthday Bash” on 9/9 gets us permanently banned. And Chowda House is hosting their 5th Annual Metal-Fest on 9/10, featuring bands that will make Drinking Songs sound like STAR 99.9: Psycho, Lightsbane, WarFear, Filthy Little Whores, Intheshit, David Carradine, Iron Tides, and Prostitution. Whew, better get your big-girl pants on for that one!

And don’t forget to check back with Alternative Control later this month for more wild action. Rachel Pixie has a column coming up about the good and bad points of being in a band, which I’m sure will ring true for many readers — and we have an interview in the works with Jessica Pimintel of Alekhine’s Gun! (*cough cough, They’re playing at Seaside Tavern w/ Arcane Malevolence, They Hate Us, and WarStrike 666 on 9/30, fucking be there, cough cough*)