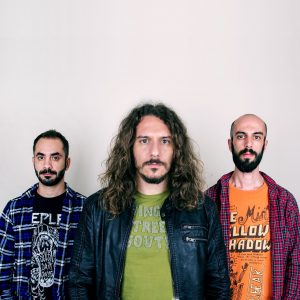 UK rockers Gramma Vedetta are good friends to Alternative Control and we are excited to premiere the live video for their new song “Hang Up My Boots.”  Shot at OneCat Studio in London, the video shows the trio at their most natural; a mix of closeups and room shots keep the perspective varied.  The song itself is a great addition to GV’s hard-hitting catalogue, with soulful singing and crunchy guitar that’s a must-hear for anyone who likes their music fast and bluesy.  Showing a strength that’s evident in previous releases, the band puts their own spin on rock n roll tropes with unique transitions and song structures.

The band said of the tune and their reasons for making a live performance video,

“We’d released singles, a full EP, a lyric video, and some live shows filmed with mobile phones from friends, but never a close up of the band sweating in a room full of amps — plus we wanted to put out a song that we’ve been playing live for over a year.  We decided to catch two birds with a stone.  Here it is: “Hang Up My Boots,” a heavy rock song about an aged musician ranting about being old and surrounded by young musicians that are just instagram posers.

So we booked the OneCat Studio, a small and cozy place in South London where Jonathan Clayton and John Clay helped us to achieve our goal.  A red-hot Saturday morning. A camera flying between our hands, faces and instruments in a long take. No overdubs. Pretty cool result!”