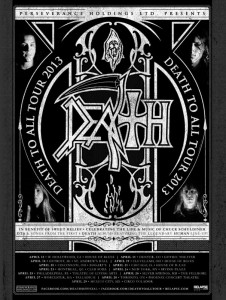 REALLY IMPORTANT LIFE-CHANGING NEWS: Baldwin, Carrie, and I will be taking an awesome field trip next week to the Death To All show in New York City.  In case you’re unfamiliar, Death To All is a tribute to Chuck Schuldiner with proceeds benefiting Sweet Relief, a charity that provides financial support to professional musicians with health issues.  This year’s lineup includes vocalist Max Phelps, guitarist Paul Masvidal, bassist Steve DiGiorgio, and drummer Sean Reinert.

Last year was the first DTA tour, and apparently there was some question as to whether the concert’s promoters were actually giving the money to Sweet Relief.  That company is no longer involved in the show, so hopefully this year’s good intentions will be carried through without a hitch.

Either way, your favorite media empire will be there enjoying the music, reviewing the show, and getting some super-professional iPhone pictures of Steve DiGiorgio’s fingers.  Stay tuned!