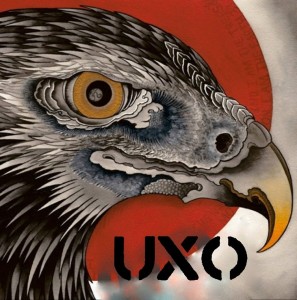 A UXO is an Unexploded Ordinance and that is beyond evident. UXO has that 1990s throwback feeling all throughout their new seven track offering. This album, in the first few riffs of opening track “Bitter,” has me thinking Fugazi has had some sort of fallen out love child with Today is The Day.  Then Chris Spencer (UnSane) throws some vox in over his riffs, only confirming this entity as something vastly different.  Aarne Victorine’s bass balances most perfectly on Patrick Kennedy’s percussion fortification. Going deeper into the tracks, there is this wild ride thrown at you with “Trauma,” the second song presented by these four horsemen of the apocalypse.

“Blind Suicide” echoes the sentiment of “Bitter,” feeling that bleakness that is life. Without missing a beat the fourth track, “Redlegs,” continues that wild ride vibe this whole album carries throughout. Chants of  “We seek the end” give way to the solemn “Everything’s a Mistake.” Then “This Won’t Take Long” brings it right back in. Reeling riffs penetrate forcefully, drop down to a simple kick and snare combo, then back into a riff ride. The duality of the vocals brings a feeling of listening to two bands at once.  This is a constant throughout the album. Track seven, “User,” is that nail in the coffin, the final thrashing madness that is UXO.  The endless energy thrown into this track give one the feeling this would only be more intense live, in person, no cell phones.

Album out now on Reptilian Records.