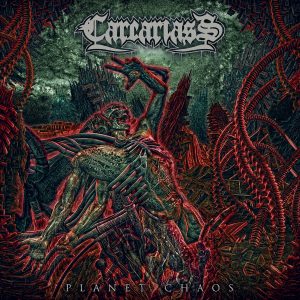 There are two trends that I’ve noticed come up this year: bands releasing albums after a long period of silence, and the overwhelming use of space as a lyrical theme. French melodic death metal outfit Carcariass checks off both of these boxes. Back with their first album in a decade, they released Planet Chaos, a bleak look into the far future of humanity.

Impressive guitarwork is right at the forefront of this album. Duo guitar harmonies, shreddy solos, and soaring sweep picking guide the listener on this journey into the reaches of space while the rhythm section stays at the back keeping the groove locked in. Jérôme Thomas’s vocals tend to alternate between roaring through the void and a low, almost whispering growl, adding tension to the narrative.

Curiously the record is half instrumental lending the feel of cautious drifting through nothingness. The instrumental sections stay relatively safe but are crafted incredibly well; “High Speed Fury” would fit perfectly into an 80s shred record while the title track weaves between shreddy solos, softer counterpoint, and straight headbanging riffs to cover all bases.

Carcariass follows the current trend of bands still being able to deliver a solid album even after many years of silence. While not groundbreaking or revolutionary, Planet Chaos is a wonderfully dark journey into humanity’s future.