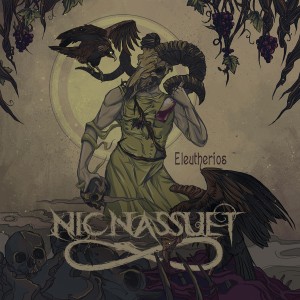 Eleutherios, the latest release from gothic folk artist Nic Nassuet, reminds us not to judge an album by its cover… But then, to judge an album by its cover.  The foreboding picture of a goat-skulled figure surrounded by vultures and human carrion would be at home alongside the album art of a band like Skeletonwitch.  This is at first a contrast with the soft, string-laden tunes — but the more you listen, the more darkness comes out.

Nassuet, who hails from Los Angeles, has a background in theater that shows in the dramatic arrangement of his songs (and his penchant for performing in Day of the Dead makeup).  He and vocalist/percussionist Catrina Grimm are the only permanent band members, but guest musicians add bass, violin, viola, cello, and various effects to the studio recordings.  My favorite track is “Black Dress,” which although nostalgic, is one of the less-dark numbers — but the violin really sings on this one.

Nassuet’s PR folks recommend him for fans of Nick Drake, Jeff Buckley, and Sisters of Mercy; I think local fans of Jesse James or James & Johnson would enjoy his music as well — less outlaw country, but still toe tapping and emotional.  Have a listen and let us know what you think! 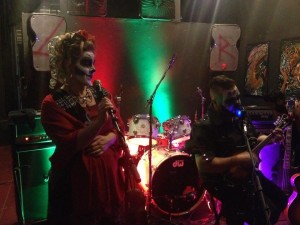