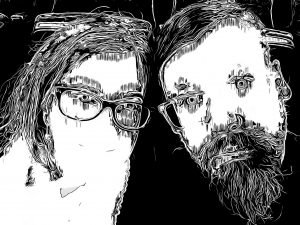 The best thing about music is the level of freedom the artist has to experiment with harmony and structure, allowing them to create whatever sound their heart desires. Bornwithhair takes conventional structure and does their best to bend and twist it to create a unique sound on their new album Radical Moon.

The first track wastes no time in introducing the listener to Bornwithhair’s unique sound. “GALCIT 45,” a song that far contradicts the idea of a structured song, opens with monologuing growls settling in the middle of a cacophony of chugging guitars, tribal drums, and piercing shred guitar. No harmony or melody really carries the song; rather, all the notes and sounds crash against each other as if thrown into the same spot from a great height.

The song “Lammas Eve 1940” begins just as harshly as the previous ended, though quickly descends into a haunting interlude akin to Tom Waits, although it doesn’t take long for the band to return to form and assault the eardrums. Throughout the record vocals are growled, spoken, sung, and shrieked over a variety of clashing noises reminiscent of Throbbing Gristle with more of a focus on metal.

Bornwithhair definitely don’t shy away from experimentation and it’s refreshing to see artists go hell for leather with their sound. While many of the ideas and separate passages throughout the album are great, it’s hampered by the freeform structure. The production on the album is 100% DIY and to their credit sounds fantastic — though much of the message and impact within the songs could benefit greatly with a tighter and clearer sound. All in all, Radical Moon is a solid piece of avant garde art with a unique approach and interesting ideas, that with some tweaking could reach new heights of greatness.