This year was my first year with Black Friday off in 9 years. You would think I would have liked to spend it the right way, by missing it completely due to 24 hour Thanksgiving food coma. But me being the glutton for punishment, I decided to spend it the traditional way. I got up at the crack of dawn just like the rest of you maniacs, and hit the road for insane deals. And lucky for you readers (and I’m sure you’re feeling pretty lucky), I’ve decided to share my Black Friday adventure. Make sure you’re not wearing sweatpants in public right now, you’re about to get chubby in the groin from this incredible piece of journalism.

Honestly, this article is more like an excuse to praise the infamous music store, Red Scroll Records of Wallingford, CT. I had heard about the shop a while ago from a fellow music-collecting coworker, and finally decided to make the trip when I heard about their Black Friday sale. So, groggy and still slightly nauseous from overeating, I got up at 7 a.m. and jumped in my friend’s car. We hit the highway with droves of psychotic shoppers. But, I’m happy to say that we survived, even if I was screaming and clutching the steering wheel from the passenger seat the whole way. Better yet, I’m happy to report that Red Scroll was worth the near death experience. Anybody who calls themselves a music fan should check out what they have to offer.

I admit that we almost drove right by the place. It shares the same size as a take-out-only Chinese restaurant. But first impressions were deceiving. Trust me when I say that their stock is incredibly large, especially for so small a place. I’d say in terms of volume, Red Scroll is 85% cardboard and vinyl, 15% oxygen. Even the back room is filled top to bottom with stacks of merchandise. Nothing is arranged in any real kind of order, which is an aspect I actually enjoy. When albums are properly organized and cataloged, there’s no chance of stumbling on something really cool and strange – something you wouldn’t have heard of otherwise. This makes album shopping sort of like a hunt, searching through random selections to find that one hidden treasure. Of course, there was no way we were going to go through everything. But man, we found a great deal of treasure.

They had a tent set up outside their back door, which is where they kept most of their Black Friday specials. Two long tables struggled to hold forty boxes or so filled with used vinyl. My friend Kirk and I spent at least an hour just browsing through these boxes, coming across a great deal of winning merchandise. I actually ended up with a dozen or so records when we were done, the most expensive one being a whopping three dollars. The condition of the sleeves and the shape of the records themselves are satisfactory. The ones I’ve listened to sound fine. I bought a great deal of prog and classic rock, but there were so many genres to choose from. Rock, Motown, singer-songwriter, punk, country, soul, avant-garde, classical, blues and jazz records were all represented. And this was just the outside sale.

Things were a lot more organized once we were in the store. Box sets lined the walls and racks packed the tiny space with albums of all kinds. A separate room housed extreme metal, rap, avant-garde and noise records. The main room carried quite a bit of modern popular music. The only thing I was disappointed with was the CD selection. Thumbing through the one CD rack in the middle of the room made me feel like I was searching through someone’s private music collection. That being said, I still walked out of the store with 5 CDs on top of 25lbs. of vinyl. Yep, it was a successful venture. And 17 albums cost me just a little over $100.

The place is tiny, no doubt about it. In fact, it was downright claustrophobic. People were crowding around, squeezing through the tight aisles, pretty much in the way all the time. Black Friday is apparently a big event at the store, which unfortunately made browsing a bit difficult. We spent as much time as we could before we felt pressured to get out of there to allow hipsters enough room to sip their tea mugs. I’d love to go back on a slower day, namely during the other 364 days a year, when I have a lot more time to nerd out on all the Porcupine Tree selections they have. OMG, they even had The Sky Moves Sideways on vinyl. Isn’t that great?! Whatever, fuck off… 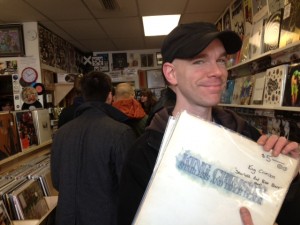 Kirk is real happy with his find...that bastard!

Genesis – A Trick of the Tail

Yes – Going for the One

Frank Zappa and the Mothers of Invention – Freak Out

Ghost – If You Have

And if you’re a not within driving distance of Redscroll, check out their online store!