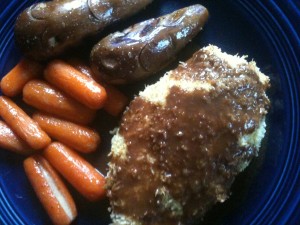 I have a vivid memory of trick-or-treating as a kid. It must have been late 70’s early 80’s (yes, I’m that old) and apparently there was a lot of hoopla going on about razor blades in candy. Of course we didn’t have Snopes.com back then — we had the telephone game and you know how that goes. So you can imagine my disappointment when my dad refused to allow me to take a freshly homemade caramel apple from a witch who lived right off Cedar Heights Road. I remember a heated exchange between the witch and my hot-headed Hungarian dad. He left and I just stood there for a while – I couldn’t process the fact that there was a gooey-wad of caramel within my reach and I couldn’t have it.

But tastes change as we age and as much as I love candy in any form, I thought it would be nice to put a savory spin on some Halloween favorites. Almond Joy Chicken popped into my head and I somehow made it happen. When I announced our dinner menu to my husband he didn’t seem at all interested in the idea. I mean, usually he’s able to feign some sort of interest in what I’m cooking, but Almond Joy Chicken? I could see he was already thinking of Outpost Pizza delivery.

The chicken part was easy. Salt and pepper the chicken and marinate it in Amaretto for a few hours. Put out a couple deep plates and a bowl. Mix an egg in the bowl, put flour on one plate and shredded coconut on the other. Dip, dip, dip – flour, egg, coconut. Bake at 350 for 20-30 minutes, depending on the size of the breasts. The sauce was made by bringing the leftover marinade to a boil (remember there was raw chicken in there) with some veggie stock and a teaspoon of cocoa. Yes, cocoa, you read that right. It’s only a little taste, what really comes through is a deep, savory Amaretto with some dark chocolate notes. Spooned on top of the coconut coated chicken the first bite was incredibly strange – Almond Joy, right down to the texture of the coconut, but yet it was chicken and it was savory-sweet in such a way that I didn’t really need dessert. It left me satisfied yet confused. My husband liked it; the first bite he agreed was strange but he finished it, chocolate sauce and all. 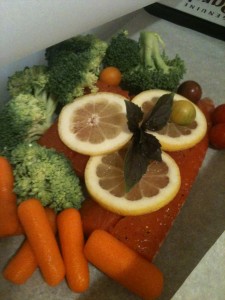 If you’re looking for something less daring (and I can’t say I blame you) try this dinner which qualifies for both “trick” and “treat” – Salmon en Papillotte .

I went to New Wave Seafood on Camp Avenue in Stamford for my salmon and I’m happy to say the place doesn’t smell like fish. That, ladies and gentlemen, is what we call a fabulous sign. I’ve never been to the place, and I had a bit of trouble taking it all in, but they have fresh fish as well as prepared foods, Wave Hill breads, various olive oils, lunches and picnic tables to lunch at.

But enough about that, back to the dish – the salmon and veggies are steamed in parchment paper so there’s a surprise element with this dinner. The single serving treats can be served still wrapped like a present and the beautiful colorful contents scream fall. Now is the time to hit your farmers market and see all the colors available for your plate. Purple cauliflower is one of my seasonal favorites, along with a rainbow of peppers and tomatoes. I went with baby carrots and broccoli along with some rainbow cherry tomatoes from my garden.

Pull out an arms length of parchment paper and fold it in half like a greeting card. Open it back up and place the seasoned fish where the writing would go if it were a greeting card but slightly closer to the fold, top with lemon slices and fresh basil, surround it with veggies and season with salt and pepper. Fold in each open side twice and staple the corners as you go – you want to keep the steam in – but for the love of Pete don’t eat the staples. I had a little fun with lemon juice; eat your heart out Martha Stewart and thank you Mr. Wizard (yes, I’m that old). You can scare your sweetie with a secret message by painting lemon juice on the parchment with a Q-tip. Then just pop them in the oven on a cookie tray for about 15 minutes at 400 degrees. This all depends on the size of the fish and your oven. Don’t open up the packaged treat until they’re seated at the table – opening it dramatically yet safely with a sharp knife releases all the aromas in a burst of steam that is a treat for the senses. 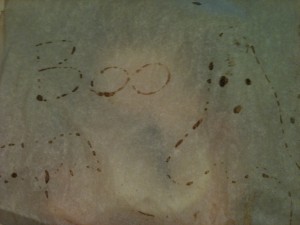 So there you have it, two dishes that capture the holiday – one in flavor and one in spirit. And that’s what Halloween is all about, spirits and candy. Now, where’s that witch live again?