“Should tattoos always be meaningful?”

That’s not the answer you might expect from a world-renowned tattoo artist, but Joe Capobianco doesn’t have time for pretension.  Originally from Long Island, Capobianco now owns Hope Gallery Tattoo in New Haven, CT.  In addition to his work there, he has his own line of tattoo ink, he’s published several art collections and flash sketchbooks, and he’s the head judge on Oxygen Network’s hit show Best Ink.

A busy guy?  For sure.  Alternative Control tracked him down for a quick interview between tattoos at this past weekend’s Westchester Tattoo Convention.  Below is our conversation: 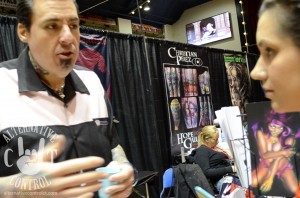 How was your recent trip to the Barcelona Tattoo Expo?

I got invited to go to Barcelona while I was in Milan, Italy last year.  Turns out it was a really beautiful city, incredible time, the convention was really, really good…  Conventions there are a lot different than the conventions are here.

They’re usually about twice the size, a lot more attendance, people are a little bit more in the way of rabid fans… It can be a little over the top sometimes because (the fans) are really into getting to meet the artist.

How did you develop your signature style?

When I first started tattooing, I was going for doing black and grey.  Then I did a couple of color pieces and then I got known for color pieces.  And I’m really big into pinups, I’ve been into pinups my entire life — as long as I can remember, I’ve loved pinups, whether it be Bettie Page or Playboy Magazine or whatever.  I got to do a Bettie Page pinup on a guy’s chest, and it turns out it got published in a magazine — and this is before the internet, so the only way you made a name for yourself back in the day was at conventions or in a magazine.  A couple pieces got published, all color, and this one pinup… People lost their minds.  I became “the pinup guy” and I’ve been doing it ever since.  It’s been now, God, almost twenty years.

So you just stick to pinups?

It’s what I’m known for, but even here I just did a little bird on somebody… I do a lot of Japanese work at home.  (But) I don’t ever do anything traditional.  Whether it be Americana traditional or Japanese traditional, I always have everything to make it look like my own.  It’s more important that people recognize it as my tattoo versus, “That’s a really nice portrait” or “That’s a really nice pinup.”  I want people to know it’s a Joe Capobianco.  That means more to me than anything else, and that’s what I pride myself on — color combinations, the way I draw, it’s all little things that add up to one of my pieces.

How did you end up as a judge on Oxygen Network’s tattoo competition show Best Ink?

That was weird, man!  I would have never guessed that they’d pick me.  They contacted me, believe it or not.  Word got out that they were looking for judges for this show (and) my name came up a handful of times with their production company.  They reached out to me and at first I said no, but the more and more I listened to it, the more I realized that if I didn’t do it somebody else would do it…  So I was like, “All right, I can’t lose anything by going out to meet everybody.”

And they fell in love with me the moment they met me!  It was almost immediate.   From the first interview, they were all about it — so I took it, y’know?

What do you feel distinguishes Best Ink from other tattoo competition shows?

The difference in our show from a production standpoint… I don’t wanna say we gave a little bit more of a shit, because I don’t know those guys — I mean, I know Oliver and I know Chris… But with us, it was more about individual artists.  It wasn’t about who could do the best line, who could do the most solid color — I mean, those are all important things.  But for me, it was who really had the best style.

I approached every challenge for all these artists as, “Show me what you guys are.”  Don’t show me the best tattoo that everybody else is doing.  Show me how you do that tattoo.  If you have a shitty style, chances are you’re going out.  But if you have a style that really stands out as your own and unique, or just original and amazing, then you’re gonna go very far in the competition.  And that’s pretty much how it went: every single season, it wasn’t the “ink master” that won.  It was the person who really had a great style and who was an incredible tattooer.

Have you ever been tattooed by any Best Ink contestants or winners?

As a matter of fact, I got tattooed by DJ Tambe [points to neck], who was a runner-up in Season 2.  I’m actually gonna get the other side done by (Season 2 winner) Teresa Sharpe.  It was supposed to happen this month but between my travel schedule and her travel schedule, we just haven’t been able to hook up — but hopefully by Christmas, I’ll be able to get the other side done by her. 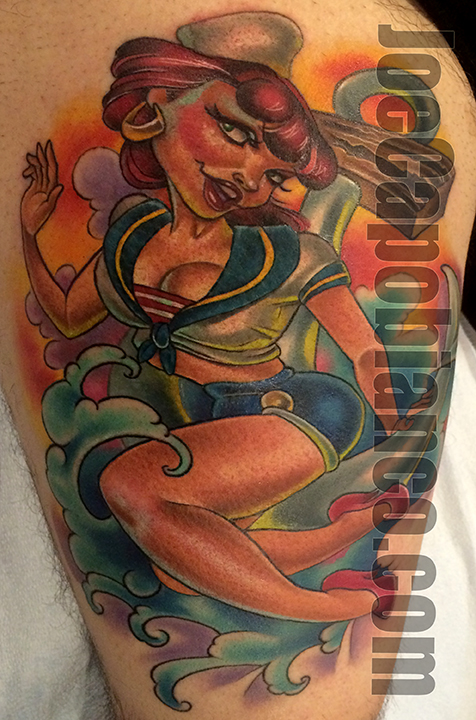 Do you feel like tattoos have to have a meaning?

Yeah no, fuck no.  To me, a good tattoo is a good tattoo.  Everybody who used to get tattooed used to do it because it was just something that was theirs.  It was something that they would take to the grave.  No matter what, it’s theirs.  So it doesn’t have to be any great, meaningful fucking tattoo.  It doesn’t have to be an “in memory” tattoo.  I mean, my first tattoo was Daffy Duck and Porky Pig.  You could say that meant a lot to me because I was a huge Warner Brothers cartoon fan back in the day, but to me it’s just a cartoon.  It’s a great image, it’s an incredible artist… And now it’s on my skin forever.

It’s great that people have all this deep meaning that goes into their tattoos, but in all honesty it doesn’t matter.  It’s for you.  Even if it’s for your mom and it’s a simple shoe or a bowtie or whatever, it means something to you.  You don’t have to wear it like a badge so that everybody who sees the tattoo knows, “Oh, his mom died and he obviously is hurt by it.”  Everybody’s hurt by that kind of thing.  Do you need to advertise it?  No.

For me, it’s really about great art.  If you can do something to your body that makes it that much more “yours,” knock yourself out.

If you were going to get tattooed by anyone at this convention, who would it be?

There’s a lot of really talented artists in this room.  There’s a guy named Timmy B. here… A couple of guys I work with that are pretty goddamn good…  I will admit I’m a bit picky about who I get tattooed by. Dave Tevenal is one of the artists I’d love to get something from eventually.  There are a lot of talented people here.

And indeed there were.  Many different tattooing styles were represented, from Japanese traditional to Americana, portraiture, and new school.  Check out our Facebook album for pics of tattooers, vendors, and some unexpected collectibles.