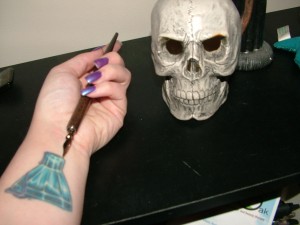 Congress shall make no law respecting an establishment of religion; or restricting the free exercise thereof; or abridge the freedom of speech, or of the press; or the right of the people peaceably to assemble; and to petition the government for a redress of grievances.

I know there is nothing within those words even hinting at the thought of tattoos, as our forefathers were certainly not concerned with tattoos in the 18th century. However, in 2012 we do have the right to the artistic expressions of tattoos. We have the right to get one and the right to receive one.  The reason for my mentioning tattoos with the First Amendment is that there have been attempts to ban artists from opening up businesses to offer their services. Since there is a high demand for tattoos, there are people whose artistic abilities cannot be dissuaded by state laws prohibiting them to open tattoo parlors.

Due to various attempts to inhibit tattoo artists to own and run a tattoo business, tattoos are now “forms of pure expression fully protected by the First Amendment,” according to a federal appeals court in California. There have been many challenges from our federal government against city bans on tattoo parlors. Places such as Los Angeles, San Francisco, and Meso, Arizona have attempted to place bans in certain areas, not allowing rightful businesses to operate. Tattoos are considered to be an “artistic expression…entitled to free-speech protection under the U.S. Constitution,” states an article in the First Amendment Center (.org).

States are not allowed to fully ban, in all areas, openings of tattoo parlors. Any state that does ban them completely will be infringing on the rights covered by the First Amendment and is therefore seen as unconstitutional. Here we come back, full circle, to what was recited previously: the freedom of speech. This covers writing and other artistic expressions as well. It is not only what we have to say, but how we are to be perceived, and that is freedom of expression.