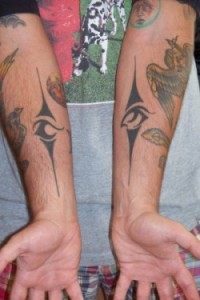 Ah yes, an article on tattoos. And more specifically, a male’s point-of-view on tattoos, since Rachel already graced us with her article last month on the subject. Not that I would know anything about it. I’ve only wasted an estimated mere $4,000 on the 48 that I have. But I’ve decided to push my tattoo ideology into your faces anyway. Why? A. Because there was nothing else to write about this month. B. Because mine are so much cooler than yours. Actually no, neither of those reasons are true. I’m not that hateable (yet). I just figured I’d let the readers in on a few pointers that I myself have followed when choosing a design and placement for permanent ink. An activity that will most likely turn to paint spills on your wrinkled skin by the time you’re 80 anyway. So let us begin!

1. I’m really not going to try and talk shit here. So, let the shit-talking commence! My fellow males, I’ve always thought that a tattoo should always represent a piece of who you are. It can be as abstract as you want to make it, but eventually, all the pieces should in some way reflect on a personality trait, a memory, an event or a deep connection with something or somebody in your life. Basically, it should MEAN something. What I advice your tattoo NOT to be, is a piece of art that represents either what you aren’t or wish you could be. Now I’m not saying this to be a dick, but I have a hard time believing that a tattoo that may look cool now, but has nothing else to do with you except for that fact that its done really well, is going to have the same appeal some years down the road. After awhile, your appreciation for that actual imagery will fade. But, the symbol that that imagery represents will stay with you. If it doesn’t really represent you, then there won’t be any ties to it other than the following statement, “Hey man, check out my tattoo. Isn’t it cool? Yeah it is, isn’t it. Okay well, nice talking to you! Bye!” 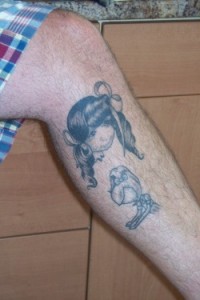 2. It’s okay to trade traditionalism for abstraction. Don’t be afraid to get something weird, unconventional or maybe a little feminine. I don’t think your testosterone depletes because of the colors and shapes you put into your skin. Not everything has to be a snake, a ship, a tribal design, a Sailor Jerry or a Japanese mural. Not that I have a problem with any of those designs, but as I said before, they have to fit into what makes you, you! We’re all pretty abstract people in our own right. I’m sure if you put your mind to it, you can think of some creative and unique ideas when blueprinting your body to be a canvas. The picture shown here of my leg is just an example of what I’m talking about. Seen in this picture is a doll’s head and a faceless girl with her arms outstretched. They’re not really something to be understood at first glance. They’re also not very manly. However they do represent something, and something about me. I’ll spare you the boring story behind them for now. In short summary, think outside-the-box.

3. This statement might seem trite, but it rings true. Always think about the future when considering the placement of your tattoo. Neck, hand and especially face tattoos are unfortunately, still to this day a taboo in most workplaces. Before getting tattooed in these areas, think about how they’re going to effect your career endeavors. You wouldn’t want them to pass an untrue preconception in a job interview, or hinder your ability to whip up a good sales pitch. These are just two examples, but there are many more instances. As much as I disagree with the lack of tolerance for tattoos in corporate America, it’s a reality at this point. A reality which hopefully is being altered right now. In my pursuit of becoming a teacher, I’m sure the day will come when my little hand tattoos, as tasteful as they are, will pose a problem in the classroom and will have to be removed. I’m hoping that doesn’t have to happen. This picture of my middle finger however will most definitely have to disappear. 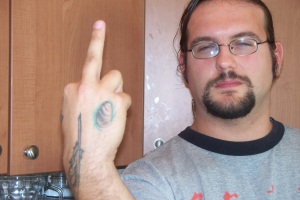 That pretty much sums it up folks. Tattoos are such a personal thing, that it’s really not necessary to break down what’s right and what isn’t. One man’s dream tattoo is another man’s crap. I’m fortunate to have no regrets really in any of the ones I have now, and it comes from simply following my quirky little tastes, and not getting bent out of shape on what it looks like to other people. Just think before you go and permanently paint your skin. As you go about your life, things are going to change. Your outlooks and attitude are going to change and what seemed like a great idea at one time may turn into a regret, it happens. But if you tattoo something that meant something to you at one time, then it isn’t really a regret if you‘ve lost your deep connection with it now. It’s an awesome piece of artwork, and more importantly, a mark on the timeline that is your life. In that way, it can be like a photo album…on your body. If you’re showing them off one day, just make sure you save the genitalia for last. Just pull down your underpants and then afterwards say, “Oh yeah that’s right, I got a dick tattoo too. Fuck off.”