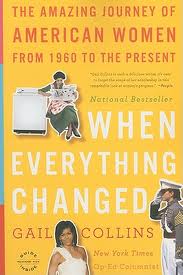 Everybody knows that most governments treated women as little more than chattel for a good deal of history.  Thank goodness that all changed overnight in America when women got the right to vote…

Except it didn’t.  Suffrage was an essential first step, but just one of many that got modern American women to relative equality they “enjoy” today.  In her 2009 book When Everything Changed: the Amazing Journey of American Women from 1960 to the Present, Gail Collins examines how women’s place in our culture has changed from, well, 1960 to the present.

Here are just a few minor inconveniences that were par for the course in the mid-twentieth century:

As an American woman born in the mid-1980s, I’ve always taken for granted that I can do whatever I want.  It’s easy to forget that in my mother and grandmother’s lifetimes, rigid social conventions – and in many cases, state and federal laws – barred women from the freedoms I take for granted.  Reading When Everything Changed, I was both shocked at the challenges that were forced upon earlier generations and impressed at the turnaround our society has made.

But When Everything Changed isn’t a bra-burning feminist manifesto so much as it is a history book.  Collins begins by discussing how the value of women’s work changed with the Industrial Revolution, and then again with the post-WWII economic boom.  Things got interesting during the 1950s and 60s when the women’s movement joined forces with the civil rights movement, and began looking up in 1964, when the Civil Rights Act outlawed discrimination on the basis of race, sex, religion, and nationality.  Then hormonal birth control became widely available in the 70s, and women’s enrollment in law, medical, and business schools increased dramatically.  In fact, a lot of the fight to make birth control legal took place in our very own Nutmeg State, “where anyone convicted of using, buying, or helping someone to acquire (birth control) could be fined or sentenced to up to a year in prison.”

So, the rest is history?  Not quite.  Blatant employment discrimination has continued in spite of the Civil Rights Act, as Collins details chapters on of Weeks vs. Southern Bell and the very recent Ledbetter vs. Goodyear.  Collins also discusses how economic changes since the 70s have necessitated most middle class women to work outside the home, and how this change has impacted families.

History, economics, and Supreme Court cases could have been dry topics in the wrong hands, but Collins keeps readers hooked from beginning to end.  Interspersing the facts with narratives from politicians, civil rights workers, and “ordinary” women who lived through these changes, the author elicits empathy, sadness, and even rage.  The violent opposition that faced civil rights protestors — black, white, female, and male — was the most disturbing.  Collins interviews one Freedom Rider who describes another being assaulted; the 21-year-old white man was “held up against a wall and punched repeatedly.  Some men held him while white women clawed his face with their nails… And they held up their little children — children who couldn’t have been more than a couple years old — to claw his face.”

And issues still exist. For instance, a woman in the military has an infinitesimal chance of being killed by a foreign insurgent, but almost a 1 in 2 chance of being sexually assaulted by one of her “brothers in arms.”  The chain of command has handled these cases so poorly that there is now a class action lawsuit pending against the Department of Defense on behalf of military sexual assault victims.  Here’s another fun one: conservative politicians are fighting to outlaw abortion and defund Planned Parenthood, and several states recently mandated transvaginal ultrasounds for women seeking abortions in the early stages of pregnancy.  Both examples harken back to the days of women as chattel to be controlled by men — but at least we can attempt to vote anti-woman legislators out of office.  (Can we vote out the Department of Defense??)

I recommend When Everything Changed  to anybody who wants to learn more about human rights or American history, but especially to twenty-somethings and thirty-somethings of both genders; I consider myself a well-educated person and the women’s movement is a topic that interests me, but I didn’t know at least 75% of what was in this book.  When Everything Changed will give men my age a frame of reference for current gender relations — this is why rape jokes aren’t funny, guys — and of course the book is a must read for young women.  It’s easy to forget that our personal liberties were hard-won, and that there are still those who would take them away should we fall asleep on the job.