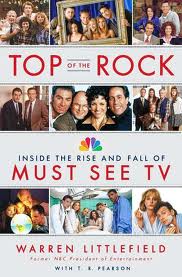 In the early 1980s, NBC was a television network ranked dead last. They trailed behind CBS and ABC (Fox didn’t arrive until the late 80s), and considered themselves in the business of “event programming” in lieu of scripted dramas and comedies. The joke at the time was that NBC was in “fourth place in a landscape where there (were) only three networks”; clearly, a reshuffling was needed. In Top of the Rock, former NBC president Warren Littlefield and writer T.R. Pearson gather many of the names responsible for shows such as Cheers, The Cosby Show, Seinfeld, and Friends to tell the winner’s version of turning the network into a profit powerhouse and creating the concept of “Must See TV.”

The idea is simple in theory yet difficult to execute: take Thursday night and fill it with critically and commercially successful half-hour comedy shows and then a one-hour drama to finish the night off. Littlefield, who started off in the early 80s as the head of NBC’s comedy division, comes off as very passionate about both his work and his success.  The book feels less like an autobiographical account and more like a mini-profile of every hit show, but Littlefield does step in often to remind us that under his tenure, Thursday nights on NBC drew over 75 million viewers every week.

Top of the Rock starts out with Littlefield going over the backstory of how Cheers and The Cosby Show were created to re-brand the network, at a time in which NBC had to guarantee Cheers creators Les Charles, Glen Charles, and James Burrows a thirteen-episode order just to get the trio into the room. The development of these shows is the real heart of the book, with various NBC execs, directors, producers and stars speaking freely about how some of the biggest comedies and dramas were created and developed. There are tons of interesting stories in these areas — for instance Bill Cosby was talked out of his initial idea of playing a limo driver in a one-hour drama — and you get the feeling that some of the biggest decisions at a network are made with frightening spontaneity.

Most of the big shows get their own chapter, which makes Top of the Rock turn into a self-promoting collection of mini-bios on every hit show rather than a chronological story of how the network went from last to first. Littlefield and Pearson get some, but not all of the big names to agree to an interview; Jerry Seinfeld and Jason Alexander were the only guys interviewed for the Seinfeld chapter, for instance, but overall the authors get enough of the actors, directors and producers to share their stories. Because the era of most of these shows is further out, there is a lot of honesty in the interviews — which becomes clear when NBC exec Don Ohlmeyer, who was installed higher up on the corporate ladder than Littlefield, is harshly portrayed as a half-mad alcoholic who bullied everyone around him.  Ohlmeyer was not interviewed for the book, which leaves readers wondering how he’d react to the negative stories told about him.

Beyond the gossip though (and there is plenty) Top of the Rock is mainly about the story of each hit show, with the beginning of each chapter starting out with how the show was created/bought, then leading into interesting casting tidbits (the character of Frasier Crane was intended for John Lithgow, who turned it down), ideas for shows that never got off the ground (without spoiling, Law & Order creator Dick Wolf’s second show idea involved a SWAT team based out of Las Vegas who also happened to be ninjas), and Littlefield himself chipping in to remind us that yes, NBC made a ton of money and he was the guy primarily responsible for selecting the shows that succeeded. If you even were remotely a fan of shows like Friends (we were this close to having the character of Monica be played by Nancy McKeon, who played Jo on The Facts of Life), ER (a 30 year old script that was dramatically re-written to update advances in medicine) and Will and Grace (referred to as “Grace and Gay” by Ohlmeyer), you will love finding out all these little-known pieces of trivia.

Of course not all the Thursday shows were hits, but since history is usually written by the winners, Littlefield tends to give shows such as Jessie (starring Christine Applegate fresh off of Married With Children) and Veronica’s Closet (starring Christie Alley, fresh off of Cheers) more of a passing thought. The meat of the book is heavy on industry talk, with suited up execs lining up to take credit for the wins and pass the blame on the losses. The “inside baseball” aspects of the book are interesting, but only if you really care about how a network does business.

NBC went from 1st to 4th after Littlefield was ousted in 1998, and by all accounts Littlefield’s replacement Jeff Zucker was blame, with one executive summing up Zucker’s lack of talent by remarking that the schedule at the time was so strong that “even Jeff Zucker needed four years to destroy it.” This is where the book fails — while NBC fell, Top of the Rock seemed to have no interest in documenting it. The “fall” part (usually what makes “rise and fall” topics interesting) gets glossed over, with random opinions like scheduling the Donald Trump hosted Celebrity Apprentice on a Thursday being a death knell, or more shots at Zucker dropping the ball.

Another aspect that no one really talks about is the growing landscape of television and how people watch it. The book is filled with producers, executives, actors and directors bragging about how The Cosby Show pulled in 30 million viewers a week and only a passing mention is made about how it would be impossible for a show to get that many people sitting in front of a television at the same time now. When Littlefield and company talk about how hit shows these days that get eight million viewers would have been cancelled immediately in the 80’s/90’s heyday, they forget that today’s viewers have far more options than the old standard of three channels.

But beyond the dinosaur mentality of the interviewees and the heavy congratulatory tone, Top of the Rock is a fascinating portrayal of how your favorite shows were made. As a book about a network, though, it falls flat; there is no real order as to how NBC became successful and then lost it. Littlefield would be better served to write the next book about his own career as an exec, as his constant need to brag and spin makes him a polarizing, yet entertaining character who can tell a more detailed story about what it’s like to run a network.