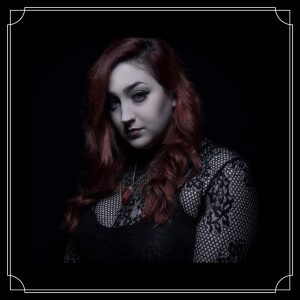 The British Invasion continues at Nerd Talk — what is this, the War of 1812??  This week, bassist Vikki of Berkshire’s gothic metal band Her Despair takes over; I have a feeling she could get quite a tabletop battle going with Nerd Talk alums Howling Giant!  Read on to find out about Vikki’s tastes in books, movies, and gaming…

While a trilogy rather than a single book, my favourite would have to be The Lord of The Rings by J. R. R. Tolkien. I fell in love with the trilogy when I first read it over a decade ago. I was instantly captivated by the magic and imagery Tolkien created, becoming totally engrossed in the books that I refused to put them down until I reached the end.

The books follow Frodo and the rest of the fellowship on the ir quest to destroy the one ring in the fires of Mount Doom. Along the way, the fellowship encounters several nightmarish creatures including Ringwraith’s, Orcs and Cave Trolls who do everything they can to acquire the ring and return it to Sauron.

With the help of Elves, Ents and Eagles, the Fellowship forge new alliances and recover old ones as they battle to keep the ring from falling into the wrong hands.

To this day, I am still a massive fan of the books and have even gone as far as to get a Lord of The Rings themed tattoo so there’s no changing my mind now.

My favourite film is Battle Royale, a Japanese film based on a book written in 1999 by Koushun Takami. Essentially, to save money and control the younger population, the Japanese government passed an Act in which every year, a group of students are kidnapped and forced to fight to the death on an uninhabited island until there is only one survivor.

The film focuses on a Shuya, a student that decides he is going to protect his best friend’s crush after he is killed in the briefing room. The pair must survive desperate classmates willing to do anything to survive to psychotic volunteers wanting nothing more than to murder them, while avoiding the danger zones designed to force the students together.

It’s essentially Fortnite with a storyline.

My favourite videogame would probably have to be Skyrim. I love the freedom of the open world and the fact it’s such a massive game. I’ve put so many hours into it and find it fascinating how my play style has changed over time, transitioning from a stealth archer to a two-handed strength build the more confident I got with the game.

It’s such a relaxing game to play, I’ve spent hours just exploring the world and familiarising myself with the cities while ignoring the main quest.

I’m also a fan of tabletop games, my favourite being Dungeons and Dragons, which I have been playing regularly for a number of years now.

Her Despair will release their sophomore album Mournography on July 20th, 2018.  Until then, check out their 2015 release Hymns for the Hopeless and like them on Facebook for updates!