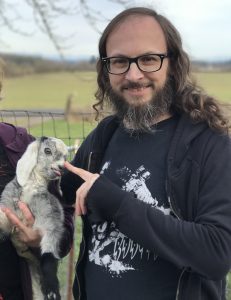 Nathan Carson will need no introduction for many of our readers.  A founding member of Portland, OR doom metal band Witch Mountain, Carson has stayed the course in the music scene for over two decades.  Persistence pays off; Witch Mountain’s self-titled fifth album was released May 25th, 2018 to many accolades.  The band is embarking on a 28-date tour in July (across the US with a couple stops in Canada), and Carson keeps himself busy writing for music publications, hosting a radio show, and booking for many bands through his agency Nanotear.

But even with all those things going on, Carson found the time to “nerd talk” with this small blog.  As it turns out, the drum, media, and booking wizard is also a published sci-fi author and self-proclaimed “lifelong nerd”…

We got our first television when I was four. The only channels we could tune in were the local PBS, and UHF 49–which showed nothing but Godzilla, Mothra, Rodan, Frankenstein, and more, twenty-four hours a day. So the first input I received from outside my immediate family was in the form of giant monsters, and Muppets. Big surprise that I ended up a lifelong nerd.

A few months later, I saw Star Wars. And over the ensuing three-year wait for Empire, I saw it a dozen times more. It was the late seventies, and we could pick up bottles and cans, turn them in for the deposit, and see a movie for two bucks. Maybe there was something about growing up on a goat farm in the middle of nowhere that made that story about a kid on a desolate desert planet who was destined to be a wizard/prince resonated with me?

So the action figure thing definitely started for me with Mego Superheroes, and then Star Wars. I eventually demolished, exploded, or launched most of those into the atmosphere when G.I. Joe introduced swivel-arm battle grip, making my old figures seem stiff and dated. Oops. Nonetheless, I’d say it was the Star Wars bubble gum cards that got me started “collecting.” That continued with comic books, then later, vinyl records. 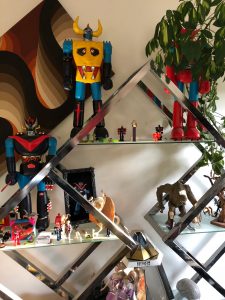 But the best toys from my childhood remain the massive 24” Shogun Warriors. I also played with those until they were destroyed or passed on to other kids, but as an adult, I’ve stumbled onto a few to replace the fallen soldiers. Mazinga, Dragun, and Gaiking enjoy a place of honor on my chrome shelf (incidentally you can see this same shelf in Star Trek 2, 3, and certain episodes of Next Generation).

A few years later, some city kids turned me on to Dungeons & Dragons. These were the same guys who cut their hair into mullets, wore Oakley shades, and passed down their Ozzy and Iron Maiden cassettes to me. I can never truly repay them, though I did eventually get them out to see Nirvana in small clubs before the hype hit.

Anyway, D&D was a very serious outlet for me. In the summer, I could take my imagination and a wooden sword into the forested hills around our farm. And in the nine rainy months, my brother Merlin (yes that’s his real name) and whatever school friends were visiting would journey into fantasy realms that I conjured.

My dedication took me to the national Gen-Con convention in 1988 where I met Gary Gygax and all the rest. I attended with the intention of becoming a game designer. But I left disillusioned, after seeing ten thousand obese bearded dudes on their hands and knees pushing battleships around the convention center carpet. I was already four-eyed, short, and snaggletoothed. With the odds stacked against me, I boxed up my games and bought a drum set. It still took a few years to pan out, but I am certainly not going to die a virgin.

I think my sense of romance came from watching an Americanized anime called Robotech. It ran early in the morning; we had awful reception at the farm, so the same kids from town would make me six-hour VHS tapes of episodes. Unlike most cartoons, it was a serial. Characters formed love triangles, and died in battle. I own a remastered box set of the entire series now, and I can still watch it with fondness thanks to its amazing art, and depth of storytelling. So many mornings I took that long bus ride to school before the sun rose, with my head rattling against the bus window, imagining that I was flying a transformable Valkyrie robot/jet. 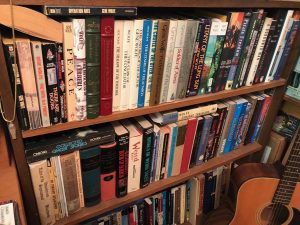 Sometime in high school, another hopeless nerd buddy with dandruff and coke bottle glasses of his own turned me on to a science fiction author named Gene Wolfe. His magnum opus is The Book of the New Sun, a four volume “tetralogy” that begins with a novel called Shadow of the Torturer. This unsurprisingly dark tale set in a medieval future world where the sun is dying and the sky is black is written in a language that recalls James Joyce, Herman Melville, and Proust. It’s the most literary science fantasy you could hope to read, and I will absolutely stack it up against Dune or Lord of the Rings.

One of my top shelves includes thirty volumes of Gene Wolfe novels and collections. In 2017, I was invited to a small convention in Illinois to conduct an hour-long interview with Mr. Wolfe, who is still writing at the age of eighty-seven. It was a great honor.

Today, I’m a published author, writing weird horror and science fantasy books of my own. My stories are in collections that have won awards, and I’ve recently made my comics debut by adapting H.P. Lovecraft’s favorite short story—a 1907 Algernon Blackwood novella called “The Willows”—into a two-issue graphic novel.

My day job is booking agent to thirty bands from around the world. I’d been an agent for a few years when the epiphany hit that all the skills I use in this work came from being a Dungeon Master. In both gigs, I assemble a party of people with complimentary skill sets, devise a route on a map, and send them forth in search of fame and treasure.

I haven’t made time for D&D in decades, but I still squeeze in a game of Talisman or Dark Tower, or Car Wars now and then. Otherwise, I tour and record with my band, write original fiction, and go see way too many concerts with my girlfriend.

It’s really crazy how much being a nerd in the eighties was a detriment. Now, living in Portland, OR in 2018, it’s nothing but an asset. Thanks, Satan!

Check out Witch Mountain’s new album and see them live this summer!