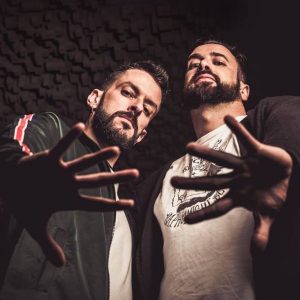 This Nerd Talk comes to us from across the pond, courtesy of Portuguese rock duo Her Name Was Fire. These guys serve up the groove just as well as they serve up the nerdy knowledge…

Besides music, one of the things that bonds Her Name Was Fire as a collective is our love of movies, video games, and books. So bear with us as we struggle to pick just one of all the amazing art we’ve had the chance to experience along the years.

Think I am kind of a movie buff, but if I have to choose my favorite movie I would have to go with Snatch by Guy Ritchie, because it always leaves me in a good mood. I am a fan of all Guy Ritchie’s movies and I see this movie as the dark comedy, brilliantly written and directed with a top notch cast, that grabs you from start to finish.

Movies are my second big passion (the first being music, of course); I’ve always been a more or less cultured cinephile (I know some worse than me), and also my other job besides music is basically video.

Like with music, I have considerable trouble naming my “favorite” movie ever. Today it feels like A Clockwork Orange, tomorrow it might feel like Blue Velvet, and a month from now it might be Joker (is it still hip to name it?) — but a movie I’ve watched countless times and love to bits every time is Fight Club. Great story, with some of my favorite actors ever: Brad Pitt, Edward Norton, and Helena Bonham Carter, to name a few, giving amazing performances! It’s so well made, so well directed, edited… I also love the photography. Fight Club has everything I appreciate in a movie, and it inspires me a lot. Everyone knows the film, and for those who don’t, I’m not going to spoil it for you. Just go watch it now! It’s Fight Club! Timeless!

My favorite book by far; Saramago describes the frailty of society perfectly and how close we are still from our animalistic nature, as the world is a affected by a blinding pandemic that shatters society as we know and shows the worst and the best of humanity. Raw and unapologetic it’s a punch in the gut, definitely worth reading. It got a movie adaptation that does it justice, so also worth the watch. 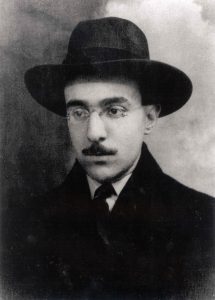 As for books, I’d rather talk about a Portuguese author that deeply influences me and certainly millions of people across the globe: Fernando Pessoa. Not only his writing, but his whole persona is a universe he translated to paper, dividing himself into dozens of heteronyms to write some of the most meaningful things I’ve ever read, as himself or any of his alter-egos.

He was a prolific writer, philosopher, a futuristic rebel that propelled his creativity beyond himself, and it moves you and makes you question your take on life. His interests and connections to occult, neo-paganism, his collaborations with other authors and artists also inspire me, helped shaping and defining who I am today.

Be it fictional, auto biographical or historical, his work is essential. I’ll suggest a randomly picked book with some of his poems, Poems of Fernando Pessoa. My suggestion is, find which heteronym you like best, and start digging it. You’ll be addicted in no-time!

I have to admit I am a sucker for post-apocalyptic stories/games and this game is just perfect. Awesome story, killer gameplay and soundtrack…. It’s a roller coaster of thrills and emotions and it stuck with me away after finishing it for a long, long time. Most of the times it feels more like a movie than a game.

Videogames have always been part of my life. Growing up as a 90s kid, they were a great source of entertainment and joy, and the perfect excuse to get together with friends and family as we all had different consoles, games, PC’s, so on.

For quite some time, I was away from the videogame culture, but recently I’ve been brought back to it thanks to close friends, and I’ve been having a lot of fun exploring new video games. One that gave me great joy lately was Control by Remedy Entertainment (who were already responsible for one of my all-time favorites, Max Payne). Control is such a trip! I have to say it even inspired me with concepts that I’m feeding on right now to fuel Her Name Was Fire’s new record, Decadent Movement.

Back to the videogame… I love it! The graphics are great, the special effects and physics are exceptional, and that, combined with a cool story of a girl with supernatural powers (maybe she could be ‘Fire’?) kicking demons and possessed humans back to the creator. I suggest you all try it! (And hope you pack a solid graphics card!)

With the massive, screaming low-end frequencies of a guitar, the thunderous and fiery rhythms of drums blended with sleazy melodic vocals, HER NAME WAS FIRE arrived in 2016 to shake the foundations of rock and lure the ears of those who dare to cross the path of their demolishing sound waves.  Guitarist/vocalist João Campos and drummer Tiago Lopes form a tight groove-rock duo that incorporates stoner, grunge, blues, and progressive rock.

Now on the eve of releasing their second album, Her Name Was Fire is regarded as one of the most prominent emerging bands in Portugal.  Their 2017 debut Road Antics was called “powerful,” “appealing,” and “gravity-defying” by reviewers.  With Decadent Movement coming out in spring 2020, there’s nowhere for this band to go but up.

Connect with Her Name Was Fire