Ricardo Mendez of Austin, Texas rockers FireWalkWithMe takes us literally into the fire with this edition of Nerd Talk, both at home and in Hell… 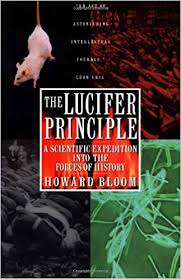 Favorite book: I read a book awhile back by this author Howard Bloom. He had written this book called The Lucifer Principle that was basically about human nature and how evil was inherent in humans down to our DNA and the very fabric of who we are. While reading it one gets the feeling of an ever-looming darkness that hangs above humanity, a constant pitfall that beckons us.  This made me focus more on being a better person and made me hyper-aware of my relationships with friends and family as well as common day-to-day strangers.  I don’t know if this is my favorite book but it is one that really made an impression on me and challenged me to think more about human interaction and self awareness.

Favorite movie: One of my most favorite movies of all time is one I have tattooed on my inner left forearm: Falling Down, featuring Michael Douglas and Robert Duval. I love this movie for so many reasons, but I’ll make this short. My mother kicked me out of the house for talking to my younger brothers about safe sex. Since it was her Christian belief that I was corrupting my brothers with this talk, she asked me to leave and move out.  So I moved into a friends backyard garage. While moving out of the house I decided to steal something out of spite so I stole a VHS copy Falling Down.  As an 18 year old living in a cold garage fresh out of high school this was the only movie I had to watch and I LOVED IT.  I’ve must have watched it about 300 times that summer (1992 I believe).  I love how the movie is shot from the perspective of a man who has snapped from everyday pressures and circumstance. Because of this Michael Douglas’ character situations in the movie are greatly exaggerated, making for an exciting watch.

Favorite game: My favorite game to play would have to be Modern Warfare 3.  I play lots of other first person shooters but MW3 is pretty much where I go when I want to dominate.  My screen name for PS4 is Psychic Microwave if any y’all wanna game with me.  I’ve been playing a lot of Black Ops 3 as well.  Not so much into the   because the lack of a campaign. When I play a character in a game, I like to know the story — and although I love online multiplayer stuff, I do love and appreciate the campaigns as well.  But that’s just me.

Listen to a preview of  FireWalkWithMe’s upcoming album The Eternal Black Rainbow below: