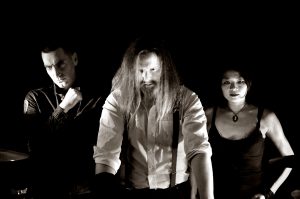 This week in Nerd Talk, M. Chvasta from Atlanta’s Dead Register gets serious about video games and movies.  Frontman and one of two bassists in this unique gothic post-metal band, Chvasta is also the spouse of the other bassist, Avril Che.  Turns out that their nerdy proclivities helped to bring them together!  Read on…

Hello, Chvasta (vocals, stringed basses) here to discuss “things and stuff.”  We are consumers. We’re here to talk about what we the staff of Dead Register consume, eh?

I’ve been hardcore gaming since the dawn of this realm of entertainment and I have about 200 favorite video games. With this little article, I’ll focus on some games that brought A and I together, leaning mostly couch co-op stuff. Mostly.

Resident Evil Darkside/Umbrella Chronicles – Before we were dating, Avril would fly to Atlanta to hang out with me and play video games. This was the first time we sat zero inches, thigh to thigh, away from each other on the couch. Not the greatest games, but they helped to “bring us together.” Sometimes it’s difficult to play when you have the overwhelming urge to pull the other cooperative gamer on top of you. Good job, crappy Wii.

Limbo – One of the deepest, most awesome games ever made. We’ve both played through multiple times. Dark times call for dark soundscapes. Beautifully bleak.

Little Nightmares – An amazing piece of art. ART. Folks put some love into this journey.

Inside – See “Limbo.”  WOW. One of the best Scifi/horror experiences of my gaming career.

Portal 2 – After we both individually crushed the single player campaign, The couch co-op campaign was… glorious. There aren’t too many games as amazing as this.  Multiple playthroughs ensued.

Kagero Deception (PS1) – When we were kids, Avril would pop by my house to sit and watch me murder the elderly with boulders.  What a unique, cool, thoughtful, evil-as-f*ck, inventive little IP.  Great memories attached to this mess.

Little Big Planet 1/2 – Somehow, we sat through all of the designer’s levels. Basic business, but such a wonderful sheen and polish.

Silent Hill – I’ve beaten all of them (sans that PS Vita skinned dungeon crawler). I wear a SH shirt at least once a week, 19 years later. Dead Register’s “Grave” video is loosely inspired by SH. Check it out. There’s even a “Heaven’s Night inspired” easter egg. The only moment of color in the video.

The last time I had Netflix, I had rated over 5600 movies, not a boast… just a frame of reference. I’ve consumed just about everything. We love most dark, artsy type of stuff… but the big box mainstream movies seemed to collectively grab us the hardest:

Dark City – Always a sucker for noir. This one was a treat, an all-time favorite. Noseferatu and Hellraiser vibes? We’re all in.

In the Mouth of Madness – Sam Neil does horror in New England. We’ve watched this too many times.

Ravenous – We should definitely eat people, not animals.

Cube – There isn’t a week that goes by that A doesn’t quote this ridiculous flick. TOO ASTRONOMICAL!!!

Happiness – One of the cutest love stories, ever.

Blade 2 – If I could trade my weak-assed mortality to be Wesley Snipes as Blayde, I would. But I’d spell it “Blayde.”

Godzilla – Newcomer Danny Ryann has consumed all the Godzilla movies and is essentially IMDB in human form.  We all, of course, enjoy Evil Dead… So just tricked him into watching The Adventures of Brisco County Junior, he is pleased. At least a third of our practice time could be dubbed “movie review”. Welcome aboard, Mr. Ryann.

Arnold Schwarzenegger’s Encyclopedia of Bodybuilding – This old gem helped us to build strong backs and core. It’s still with us, now as a riser for A’s iMacintosh Personal Computer.

Thank you for taking the time to get to briefly know us. Cheers and enjoy the new Captive EP!

Captive will be released November 2nd, 2018.  Fans of Type O Negative, Chelsea Wolfe, and The Smiths, pre-order it here!