You can’t get all your information from Buzzfeed and Facebook – sometimes, you gotta crack open a book.  In my day job as a school librarian, I came across The New Big Book of U.S. Presidents and took it home for some extracurricular reading.  Here are some things I learned about our presidents that I had really never seen on the internet before:

Union-general-turned-President Ulysses Grant (R, 1869-1877) has something in common with many of today’s celebrities: he was a cited as a reckless driver.  The only difference?  He was speeding on his horse.

In 1928, Herbert “No Vacuum Jokes” Hoover (R, 1929-1933) ran on the campaign promise of “two chickens in every pot.”  But less than a year into his presidency, there were no chickens in any pots – and in 1932, he allowed the army to use force against protesting World War I vets. This led to quick defeat in the next presidential election. 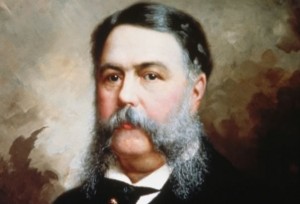 Chester Arthur (R, 1881-1885 – has anyone even heard of this guy?) avoided his official duties by hanging out on the presidential yacht and throwing fourteen-course dinner parties.

Andrew Jackson (D, 1829-1837) joined the Revolutionary army at age 13 to fight for America’s freedom from the British crown.  But in today’s world, you get arrested if you let your 13-year-old babysit….

Dwight D. Eisenhower (R, 1953-1961) thought about becoming a cowboy in Argentina, but joined West Point instead… And the rest is history.

Um, this is real.

Theodore Roosevelt (1901-1909) actually was a cowboy in his youth, ranching cattle in the Dakotas before going off to fight in the Spanish-American War.  According to Google Images, he also rode a moose one time — Presidents were so much more bad-ass back then!

Both John Adams (Federalist, 1797-1801) and Thomas Jefferson (Democrat-Republican, 1801-1809) died on July 4, 1826 – the fiftieth anniversary of the Declaration of Independence.  (And BTW, there was once such a thing as a “Democrat-Republican”?  Someone needs to tell that to today’s politicians…)