Nopes are back, continuing their Nerd Talk Takeover into August.  Today we have three categories of horror flicks: Loony Goons, Jokers, and Date Ruiners.  Make sure to check out Nopes’ just-released album Stapler on bandcamp!

These are the dumpy dumpers you can’t help but love. They’re the movies that make you question how some movies are funded, but are ultimately extremely grateful for. The following movies are recommended for use only under the influence of anything but sobriety: 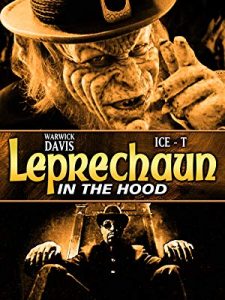 Leprechaun in the Hood

Warwick Davis is a hard working little dude that has had some amazing roles in his lifetime — working in the Star Wars films, alongside Bowie in Labyrinth, Chronicles of Narnia, Harry Potter, and more recently with the Ricky Gervais crew. This movie is a great demonstration of how amazing of an actor Davis is, while also highlighting how hilarious he can be (see the bathroom scene with him and Ice T). The movie follows a young group of rappers who cross paths with the leprechaun and end up using a magic flute (no shit) to bring their career to the next level. There’s also a cute little message in it when they debate as to whether they should keep their message positive for the kids, or turn more towards the mainstream of the time. This is the golden era of the Leprechaun films, where they ended up really jumping the shark by the fourth or fifth one. You might as well check out Leprechaun in Space while you’re at it. There’s no way in hell you’re going to be disappointed.

Ugh, this movie barely makes the list. It’s the worst movie you might ever watch. If you make it through this one, more props to you. It’s as silly as it is trashy, and is just horrifyingly grotesque at all other moments (see – cotton candy cocoon). I don’t have to tell you what it’s about, because the geniuses that wrote this piece of shit were kind enough to put it all in the title. This is a great movie to watch with friends, so that you can torture them and watch their patience and sanity fade. Watch at your own risk.

Is there anyone better for a horror comedy than Bruce Campbell? That’s completely rhetorical, because nobody will ever come close. Evil Dead 2 is a loony masterpiece that makes you giggle as much as it genuinely frightens and disturbs you. It’s also one of the most self aware franchises; sending Ash to the Middle Ages in the sequel, and finally going to full speed gore and campy glory with the fantastic Ash Vs Evil Dead series. I’m sure you’ve probably seen Evil Dead. Great, now you can go watch Ash vs Evil Dead. Seriously, I wish I never saw Ash vs. Evil Dead, just so I can go back and binge all of it for the first time again.

I’m not even going to put Shawn of the Dead in this list, because everyone knows about that movie. Even the people that hate horror movies have seen Shawn of the Dead and love it. It’s one of the best examples of how hilariously enjoyable it can be to combine what are typically such conflicting genres. Horror comedies take our dark senses of humor even further into the shadows of monsters, death, and destruction. Often times, it can be a steaming hot pile of garbage that nobody except some open mic comics or failed improv groups would want to touch. Other times, it shits on every other movie in either the horror or comedy genre. These are shining examples of the latter:

I’m not going to lie, I’m a bit of a sucker for Tyler Labine. He’s been everything from a stoner medium (Deadbeat), to a stoned dude trying to help his friend hunt souls from hell (Reaper). He’s even in the newest X-Files season in the episode Mulder and Scully Meet the Were-Monster. The dude is straight up a man after my own fart. This movie is a shining example of his comedic genius, and how much of an iconic horror comedy actor he is going to become. In this movie, he plays a loveable hillbilly (alongside Alan Tudyk) who are mistaken by college kids for deranged killers. This movie is slapstick to the extreme, and just such an enjoyable ride. 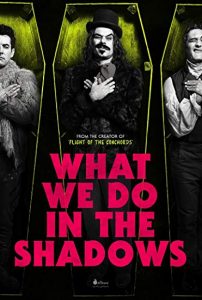 What We Do in the Shadows

If you’re wondering why you enjoyed the most recent Thor movie, you can thank Taiki Waititi. Waititi and Jermaine Clement are the masterminds behind what is one of the few horror comedies to give Shawn of the Dead a serious run for its money. This hilarious movie is a faux documentary into the lives of four vampire flatmates. Proper horror nerds will be appeased with their classification of vampires (including Jermaine as a Vlad the Impaler type & a Nosferatu type also thrown in the mix), while the comedy nerds will be blown away by the writing with this movie. Waititi stated in a recent interview that this film took seven years to write — SEVEN years. All I can say is that it shows, and has certainly raised the horror comedy bar worldwide. In fact, this movie was such a hit that there’s a sequel in the works (We’re Wolves), a What We Do in the Shadows show coming to FX, and yet another spin off tv series about the cops in the show (think X-Files, but dumb cops). Out of all of the movies on this list, this is the one I’ve seen the most amount of times. There hasn’t been a single opportunity turned away in rewatching this ridiculous masterpiece.

Director Jeremy Saulnier and Actor / Director Macon Blair are two you would most likely recognize from the Green Room and the more recent I Don’t Feel At Home in This World Anymore (which features a great villain played by none other than David Yow of the Jesus Lizard). However, Murder Party is where it all started. It was the breakthrough for the two, who were part of a childhood team called The Lab of Madness. These old friends have been making horror flicks and random shorts since they were kids. After getting no investors, they decided to green light their own movie and just roll with it. Murder Party surrounds a loveable loser that gets sucked into quite the shitty situation on Halloween. I’d tell you more, but you can also just read the fucking title.

What the fuck? Seriously, man. Why the hell are you trying to watch this? What kind of depraved twisted animal do you have to be to watch this shit? Are you really that much of a rubbernecker? Well, we’ve all been there. Here are the most loathed of the litter, the shittiest of the cesspool, the absolute most despicable movies that will restore your hate in humanity. The date ruiners:

I think it’s true love when your girlfriend decides to stay with you after showing her Salo. I hadn’t seen it yet, and I wanted to dive into the nightmarish experience with a companion. This film is based off of the book The 120 Days of Sodom by Marquis de Sade. I guess you can compare the subject matter to an Eyes Wide Shut type of elite secret society, but substitute the attractive adults with innocent kids and creepy old rich dudes. Now, you got this steaming hot pile of repulsive shit called Salo. I don’t know if it was the candle to the dick scene, or the rich libertines that feasted on shit from forced constipated asses (yes, the sick bastards wouldn’t let them take a dump for days), but I’m totally good off of ever watching this movie ever again. Now, I find this movie pretty despicable but someone actually fucking shot and killed the director of the movie three weeks before the premiere. Rumor is that some of the scenes are based on true stories. I certainly hope not.

Another zany entry from the Italians. It’s not all just pizza and pasta. I almost feel a little bit of shame in my heritage, that we were able to pump out such barbaric representations of humanity. Then, I remember Ancient Roman Mythology, and it’s really not much worse. This movie has a great creative concept though — it’s one of the first (and best) tales about documentary crews going out to the unvisited areas, where the land is still as lawless as it is brutal. The fake documentary follows a team that studies and films a cannibal tribe in the Amazon. How could that ever go wrong? Although this movie can be a bit much, and extremely distasteful at other times, you gotta give it to them for being able to work with what special effects they had at the time. This movie was so convincing that it was not only banned in multiple countries, but the Director (Deodata) was also brought to court on charges of making a snuff film. Yup, they actually thought those actors were killed. I mean, it also doesn’t help that Deodata made all of the actors sign agreements that they wouldn’t appear in any other films or media at all for the following year. Ya know, just to help give it a more authentic feel. Long story short, Deodata had to demonstrate his special effects in court and even appeared on an Italian talk show with a few of the actors to clear the air. The turtle scene? Well, that unfortunately was real. Not for the faint of heart.

All right, I’m going to be real honest with you. It may make me lose any ounce of credibility I might have mustered from you, but that’s the way she goes. I actually haven’t seen this movie. When I was learning about banned media, and encountered the other two films mentioned in this section, A Serbian Film was one of the top contenders thrown around. All it took was the description of a few choice scenes that made me decide that I didn’t want to see this movie. My buddy, who is a horror movie and comic book fanatic, swears it isn’t that intense in the film. He actually loves it. Let’s just say I hope I don’t get put on some sort of government list for even googling this title. It’s revolting, disgusting, and an absolute king of date ruiners. Banned in eight countries, and yet another film that was investigated for real crimes. Some critics actually go bananas for this movie, but of course, they’re US critics.

…And that’s a wrap!  Nopes certainly gave us a thorough overview of many horror subgenres, and this editor won’t be seeing A Serbian Film any time soon.  What do you think about Nopes’ movie recommendations?  How about their music??  Let us know in the Comments section!