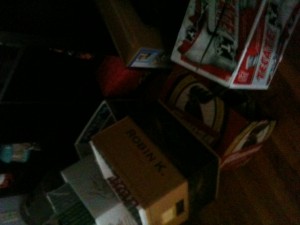 This is my first time doing a rant since I started writing for this site just about a year ago, but it is one that is absolutely deserving of the title “rant.”  Moving.  Or as I refer to it, “the move” because move is a four-letter word and it rightfully should be.  In the context of moving from any domicile to another, it should be one that isn’t even allowed to be spoken out loud on television.

Quite a few of us who write for this esteemed, award-nominated (we’re that awesome) website have moved or are moving in the past few weeks. It seems as if all the rules about moving went out the window and we all had, or are having, a hell of a time.  I attribute a lot of it to companies (moving and otherwise) doing anything to make a buck, but some of the things I am dealing with are just unreal.

Oh, I might add, I am moving from a house I once owned (and thought I would live in forever) to an apartment and going through a divorce while I am doing this.  No stress or anything!

So I move in 13 days. Less than two weeks. Do I have a moving company?  NO.  Why? Either they want exorbitant amounts of money to literally move boxes and small items (I am having a bed, entertainment center, bookshelves, a dresser, a table, and a couch delivered, and I am moving fragile things and cats on my own — not that I would expect anyone to move my 100-year-old cat) or they can’t do it, even though June 1st is a weekday.

One company quoted me a reasonable $450, and when I called back to confirm, I was told I’d have to pay an “out of state fee” and that I was moving a good 15 miles further than I am, and it skyrocketed to $950.  For boxes, a couple of lamps, an area rug, a fold-up bowl chair, and two side tables?  REALLY? And the move is only 11.5 miles.  And while I do live in New York, I can spit on Connecticut from my driveway if I try really hard, so it should not matter that they have to be maybe one whole mile into New York to move my stuff to Connecticut.  Anything to make a buck, I guess.

So I am here, 13 days to go, and have no idea how this is happening. I think I will be doing all-day runs in my Ford Focus (oh, sure, what a great idea it was to want a small car – never mind that I am also in a band and we ALL have small cars, though admittedly, I was not in a band when I got said car).  Doesn’t that sound fun? Oh well. Life is life.

The move (four-letter word) is so consuming, I woke up at 5:30am and started packing things. I did it for about two hours and went back to sleep. Thankfully, it’s a weekend – today, anyway. I actually have a real-world job beyond just yelling and rolling around on the ground for The Midnightmares, and I need at least half a brain to do said job.  (I can yell and roll around on about a quarter of a brain, but legal documents require a little more thought.)

But it gets better! Even if you go to Ikea (in the far off land of New Haven) and wander their zombie mall of stuff (even with a list of exactly what you want) they cannot tell you when it will be delivered.  So, I can take a chance and have my stuff arrive at an empty apartment, or arrive for the former tenant to entirely hate and want to murder the person taking over her former home, or I can move and live without furniture until Ikea feels like delivering it. And then put my poor (but very much loved) boyfriend (who is dealing with psycho-moving-Pixie-brain to begin with) through the process of assembling Ikea at their whims.  Dear God. Though I do apologize to the poor Ikea phone representative who had to listen to me sobbing “why is my life so ridiculously difficult?” at him.  He deserves his own rant, since he had no idea what to do with a girl who sounds about 12 on the phone literally sobbing because they cannot guarantee June 1st delivery.  He was sympathetic and I apologized about a thousand times.  Such is the fun of moving.

And let’s talk boxes.  I discovered not one, not two, but three liquor stores in the state of Connecticut that would not even give me a single box to move with.  Normally, liquor stores are so desperate to give you their (sturdy and ideal for moving books, dishes, and glass things) boxes, you have to beg them to stop before they tie them to the roof of your car and off the rear bumper as if you had a “just married” sign on the back.  But not today. Nope, I was told “we need them.”  What any store needs about 50 empty boxes for is well beyond my grasp, but apparently Jessie also had the same problem when she moved (for much better reasons than I am. Congratulations! I love you guys!)

It should be noted that Vista Market hooked a girl up. They may be sobbing  that Connecticut is going to allow Sunday liquor sales, but they are still generous with the boxes and I happily cleaned them out, so if you are moving, don’t try there. And sorry if you did.

As I end this rant, I am but a loony red-headed girl, sitting on her soon-to-be-former couch in pajama bottoms, a tank top and a baseball cap, looking at a wreck of a house she thought she would never move from with no clear plan, a lot of stuff packed, and a lot of empty boxes that will still yet contain the things I have collected during my time on this planet.  The other girls who write here got a bunch of stuff the other night over pizza, sake, wine, and beer… Goodwill made out pretty well, too.

To sum: at this point, moving sucks. But there will be a Part Two to this, in a few weeks, where I tell you how it all worked out and I freaked out for no reason and everything is fine and I love my new apartment and am so, so happy to once again be a full-on Connecticut resident.  But for now?  Someone bring me vodka. And wine. And sake. And a bunch of strapping males who are willing to move my crap for me (I wish I never got into comic books, action figures, horror movies, and wrestling) and go to Ikea and pick up the rest.  A girl can dream.