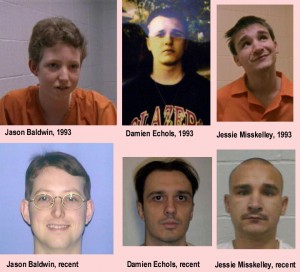 Editor’s Note: Danielle Gombos, a graduate of the University of New Haven’s criminal justice program, did extensive research on the case of the so-called “West Memphis Three” before they were released from prison in August; she adapted this article from her research. In light of the case’s eventual outcome and the recent execution of Troy Davis, the importance of forensic evidence has come to the forefront of public debates about our legal system.

The case of the West Memphis Three has been a source of great controversy for almost two decades now.  In 1993, “three eight-year-old boys were found mutilated and murdered in West Memphis, Arkansas.”[1]  Three teenagers, Damien Echols, Jason Baldwin, and Jessie Misskelley, were convicted of these crimes with no physical evidence tying them to the case; furthermore, the majority of their interrogations were never tape recorded.[2]  Their recent release from prison has put a spotlight on the possibility of grave errors within the American justice system.

The eighteen-year-old case remained a widely-watched news story, as various parties fought for Echols, Baldwin, and Misskelley’s release.  Much of this fight centered on the investigation, specifically because “the police had no evidence at the time of the arrests other than an array of statements” by one of the boys, Misskelley.[2] Since childhood, Misskelley had been identified as having “deficits in his general information, abstract and concrete reasoning, numerical reasoning, language development, word knowledge, verbal comprehension and spatial visualization.”[2] His statements are now being viewed as a coerced confession based on his mental capacity and because he later retracted his confession. This is a significant issue with the case because “a confession has a compelling influence on jurors and they are more likely to convict on the basis of a confession than anything else.”[3]

Aside from the failures of the actual investigation, many believed that the West Memphis Three were targeted because they were seen as outsiders by their community. The boys were accused of being Satanists because they “had long hair and wore concert T-shirts with bands like Metallica and Guns n’ Roses, and Ozzy Osbourne and U2.”[2] Being viewed as “different” throughout adolescence because of dress, music, or other interests is something that most people will encounter.  However, this case showed that the practice of stereotyping people as “bad” or “evil” because of their musical tastes is all too common in our society.

The events that took place on May 5, 1993 forever changed the lives of three little boys, three teenagers, their families, friends, the community in which they lived — and due to the controversy and injustice exhibited by this case, our country. The fact that there was no evidence substantiating the convictions of the West Memphis Three other than a coerced confession by a mentally handicapped teenager pushes against the basic concept of the criminal justice system: the idea that one is innocent until proven guilty. How did this proof lie in the statements made by one individual?

Eighteen years later, celebrities, advocates, supporters, and even some of the parents of the victims believe the wrong people served time for these crimes.  The fact that The West Memphis Three are finally out of jail is bittersweet. On August 19th, 2011, they were released after entering an Alford plea.  This plea does not clear them of the crime, but only states that they acknowledge there was sufficient evidence to convict them. This in itself is another injustice to these three men. Based on the information and evidence gathered and examined, it has become increasingly more apparent that Echols, Baldwin, and Misskelley were used as scapegoats by a community looking to quickly place the blame of a horrific event rather than searching for the truth and holding those responsible accountable for their actions.