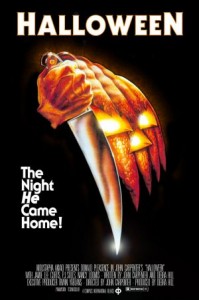 I don’t care if they call it a remake, a “reboot” or a re-envisioning, the current trend of taking perfectly good horror movies and making them again needs to stop. I grew up on horror movies and am not one who is particularly scared by them (just don’t ask me to watch John Carpenter’s Halloween alone, or I’ll be pacing my house, expecting to see Michael Myers pop up outside one of my windows), but I appreciate them for what they are. They’re over-the-top. They’re ridiculous. They make you jump. They have a sick little sense of humor to them.

Being partial to Jason Voorhees, I actually spent money to see the “reboot” of the franchise in a theatre. I was with two friends, we were all groaning and face palming the whole time. Jason is all wrong. Just to start, he is keeping up a house – where he apparently lives – complete with electricity, strings of Christmas lights, and candles. Jason isn’t exactly a smart or capable… whatever he is. He appears to know very few things beyond picking up sharp objects and murdering (usually) horny teenagers with said objects. Beyond that, I don’t think he has ever been shown to know how to do anything but somehow travel from Crystal Lake to Manhattan. Yet in the remake, he has managed to get to a store and purchase household goods. This means he has money. There is a good possibility this is the result of the gigantic weed plants that are growing right by his house.

And then there’s Nightmare on Elm Street. Freddy, pre-death, is portrayed as a bad guy you definitely wouldn’t want around your kids, but is not actually a serial child killer. In fact, all the kids he messed with are alive and well, and he’s back for vengeance on them. And whoever remade this movie missed something absolutely key to Freddy: he doesn’t have a cheesy sense of humor – at all – about what he is doing. How Ronnie Yee could nail Freddy and Jason in the awesome 2003 movie Freddy Versus Jason, and yet nobody (read: Michael Bay, a scourge upon the fine art of filmmaking) could get it right less than a decade later is mind boggling.

I would like to take a moment here to stop complaining and actually praise Rob Zombie (who is admittedly one of my favorite filmmakers – when he does original material) for the first half of his reboot of Halloween. He gave Michael Myers a logical back-story (unlike the sequels to the absolute classic horror masterpiece that John Carpenter put together) and it was gritty, logical, and real. We just didn’t need the second half of the movie, though it wasn’t awful, and we sure as hell didn’t need the completely ridiculous sequel.

The Texas Chainsaw Massacre also got the reboot treatment, as if the increasingly ridiculous sequels that already existed didn’t take a huge steaming dump on the scary, creepy Tobe Hooper classic. And the biggest problem is that while the “remakes” and “prequels” were far more gory and violent than the original movie, they didn’t scare. They just borrowed pages from Eli Roth’s playbook (thanks for Cabin Fever, you should have just left it at that) and tried to be as violent and bloody as possible and pass it off as horror.

The reason the original Texas Chainsaw Massacre and Halloween work so well – and are actually scary – is they mess with your head. They don’t just pile gore upon gore like they were trying to outdo The Passion of the Christ (you know, that movie Mel Gibson made for Troma with all that really bad fake blood in it). They screw with your head. They creep you out with Michael Myers just standing silently in a window. With grandpa dropping the hammer while the twisted up family laughs. To truly scare, you can’t be heavy-handed. And you need some humor in there – mostly to lower the viewer’s guard only to scare the crap out of them two minutes later.
The list of grave offenders goes on and on. The Hills Have Eyes. The Last House on the Left. Psycho. And of course, because Americans can’t be bothered to read subtitles, Ringu (The Ring), Let The Right One In (Let Me In) — if I were the author of that book, or the director of the original movie, I would stab whoever remade that. 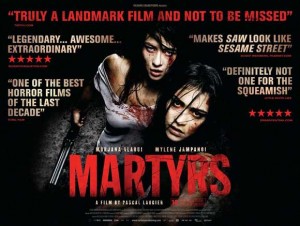 I recently heard they are plotting to remake the most mind-screwingly painful to watch French movie, Martyrs for American audiences. One, this will never work because it would never get released here, even as a hard “R” as is. Two, if you change a single thing in that movie, you take away the power it has. It’s a horrible, brutal movie – but it’s deep. There is a reason for every bit of violence in the movie – it is not (to use a term I hate) “torture porn.” It has a meaning, and when you reach the end, you’re almost shellshocked by everything you just took in.

…And someone wants to make that Americanized.

Look, just make something new. There have been some great original horror movies made in the past decade. Ginger Snaps is a Canadian gem of a werewolf movie. Eden Lake is a really twisted British “survival” horror movie, as is They which came from France, the country that also brought us Inside, Frontiers, and the above-mentioned Martyrs. Japan and Korea have been working overtime on horror movies ranging from Suicide Circle to A Tale of Two Sisters to Bloody Reunion. It seems like everyone else can be original and American filmmakers have nothing better to do than take other people’s ideas and make them “theirs” – losing most of what made the original idea awesome to begin with.

So F-you, remakes. And while we’re at it, F-you PG-13 horror. That’s not going to scare anyone, ever, but that is a rant for a different day.