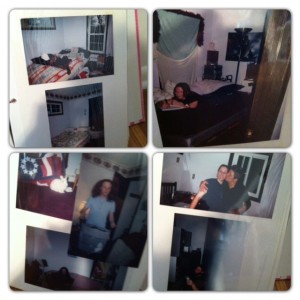 Apartment photos, from the days of actual photographs.

I didn’t grow up in Danbury, but I grew up in Danbury.  It’s the city where I learned to work hard.  It’s where I met my best friends and where I met my husband.  (On a Saturday morning at the Three Brothers Diner — from the minute I saw him, I knew he was trouble!)  After graduating from Westconn in 2007, I found a job in Stamford and have lived on the “Gold Coast” ever since — but only recently have I begun to feel at home the way I did in that Padanaram apartment.

Every couple months I end up back in Danbury for one reason or another, and I’m sad to see how the scene downtown has changed.  Most of the places I hung out have closed, some more recently than others.  The Heirloom Arts Theater and Tuxedo’s are the only spots left that book heavy music — albeit Tuxedo’s does so sporadically, with bands literally competing on opposite sides of a curtain.

Not to beat a dead horse, but one thing that sucks about downtown Danbury is that the Heirloom can no longer serve alcohol.  Like, really?  I’m twenty-eight.  I’m a teacher.  I don’t want to drink in the parking lot like a criminal, I just want to go inside and buy a freakin’ beer.  My friend Jim and I went to the Heirloom for a show the other day and had to go all the way to Two Steps to find an English-speaking bar that was open for business. 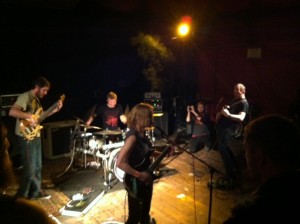 So, who’s to blame?  Is it the economy?  The venues themselves?  Is “downtown” being too stingy with liquor licenses?  If anybody has those answers, it’s not me.

Looking for some reliable elucidation, I asked Mercurial founder Amanda Bloom to share her thoughts on the topic. “There are lots of variables as to why the music has dwindled out of downtown Danbury in the past few years,” she said via email. “We don’t really know what was happening inside places like Larry’s or Hat City and whether bad business practices were to blame.  I think one of the main causes is the restriction on liquor licenses downtown – essentially, a new standalone bar can’t open due to city ordinance.  And a bar can really make a difference in whether a music venue can sink or swim.  As other music venues have closed, there hasn’t been much potential for new venues to take their place.”

But Bloom was optimistic that the area could return to its former glory, saying, “It seems like things are starting to shift up at City Hall, and I have a feeling downtown Danbury could become a much different place in the coming years.”  She recounted how the independent music scene “really gelled it all together,” bringing local, national, and even international bands to the city several nights a week.  “It was incredible!” she said.  “I remember seeing Civil Twilight (at Cousin Larry’s), a band from South Africa.  Since then, they’ve blown up.  You can hear their music on TV all the time.” 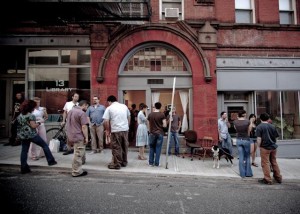 For now, though, the twenty-something and thirty-something denizens of downtown will have to make do with what they’ve got.  And there are things to do — The Heirloom keeps on trucking with its soda bar, The Mercurial brings art and music events to its Library Place gallery regularly, and various organizations host cultural events in the city.  (Yeah, Dalai Lama!)

I’d like to think that the potential and customers are there — is it really that hard to get college students to go to bars? — and that Danbury will get out of this slump soon.  But I’d be content if I could buy a beer the next time I go there for a concert.

The ‘Crown of Clowns’ illustrative painting exhibit at The Mercurial Gallery has been rescheduled due to a power outage from Superstorm Sandy.  The exhibit will open to the public for regular gallery hours on Wednesday, November 7 at 11am, and the exhibit’s opening reception will take place on Saturday, November 10 from 7 to 9pm.