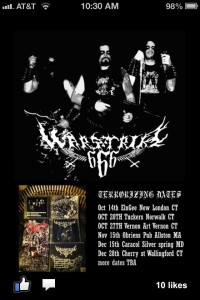 If somebody could be called the godfather of Stamford’s heavy music crowd, it would be Angel Blood.  Playing metal since 1993, the vocalist and multi-instrumentalist has been part of too many bands to count: From Below, Baphomet’s Horns, Age Old Nemesis, Infernal Solstice, and Arcane Malevolence, just to name a few.  Angel’s — or, Weapon A’s — latest endeavor is singing and playing guitar for black metal band Warstrike 666.  When Alternative Control interviewed him earlier this month, he was optimistic on the state of metal in Connecticut and excited about Warstrike’s upcoming concerts.  Enjoy!

Alternative Control: What bands are you currently a part of, and what are these bands up to?
Angel Blood: I have been working with Warstrike 666 behind the scenes with a new drummer and we will be releasing a promo CD with 5 songs for the next 4 shows.

AC: As someone who’s been playing music for a long time, what are your thoughts on “the scene”? How has the local music scene changed (or not changed) since the days of From Below?
AB: It definitely has changed.  Back in ’97 I had to go to New York City to play with death metal bands. Nobody was playing that kind of genre until now; these past couple of years, it has been very cool to see the genre growing in Connecticut.

AC: How do you balance playing music with “real world” responsibilities?
AB: My wife has much to do with it — she has supported me from the beginning. Having a studio in my house helps, and my family also helps a lot.  Like, my sister is being very active with my kids and helping us get to shows.

AC: As someone who doesn’t listen to a lot of black metal, it seems like being a black metal fan is more of a lifestyle or political statement than being a fan of other genres. Can you talk a little bit about the philosophy behind the music? (And the spikes?)
AB: I have been playing black metal since ’93 with a band called Godless in Puerto Rico. When I went to a university to study music, they were the only band around that was heavy and sick to play with. It really grew on me; after the whole grunge movement confused the metal scene, I got more into the obscure black metal like bands like Morbosidad, Blasphemy, and Beherit, and I wanted to keep that style of music alive. It remind me of what Venom was like in the 80s: fast, heavy, and symbolic.  On the visual side of metal, I like wearing gauntlets and bullets and corpse paint. It gives the music more meaning — I hate when I get to a show and see dudes wearing jerseys on stage… WTF —  this a metal show, not a sports event. 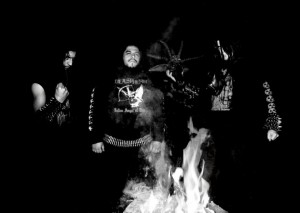 AC: What are some local bands you would recommend to our readers?
AB: Xenosis, Eyes of the Dead, Pink Missile, Physics of Demise, Lyra, Alcoholicaust, Witch King, Martyrvore, and Rezin.

AC: Haha, thanks for the shoutout.  What advice would you give to young musicians who are trying to make a name for their bands?
AB: Do what you like and don’t let others tell you what to play or how. It’s a lion’s den out there, the music business is confused. We’re living in a age of “Who do you know?”  And don’t wait for a record deal — if you’re not Justin Bieber, it’s not going to happen.  Good luck, my friends! \m/

Find Warstrike 666 on Facebook, ReverbNation, and Encyclopaedia Metallum — and go to a fucking show!