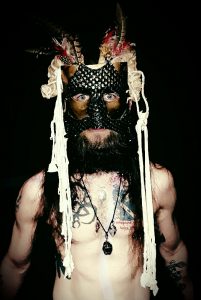 “Blackened.” It’s a funny word. Great Metallica song, but so many black metal bands these days fall under the moniker. Does “blackened” denote an extra dark, crispy exterior, like a perfectly seared cut of tuna? Reminds me of my days a teenage kitchen slut, sizzling Ahi tuna in the Grim Poconos Mountains. TRVE story.

Enter, now, blackened stoner metal from the planet Tumulus. A very different flavor of the depressive black metal variety. Their name is Advent Varic, and they are fronted by the formidable and mysterious Captain Graves: a man who looks like he raided his grandmother’s spare blankets and crafted them into an alien war dress, reminiscent to Buffalo Bill in Silence Of The Lambs.

The Captain’s latest auditory abomination, Tumulus Part II: The Ravaging, is extremely far out stuff, man, to be succinct. His 14-minute Magnum Opus is a simple story of ruin, on the planetary scale.

“The Ravaging” is a feast of crunchy, melancholy melodies, and soaring, dissident leads, that wail like jet fighters on a suicide mission. Graves unleashes an intergalactic swarm of nasty guitar riffs to match his howling menace.

“Just like before You’ll find peace / In pieces ” bellows Captain Graves, in one of many goosebumps-inducing climaxes. The songwriting provides many a frosty guitar hooks that made me feel like I was spiraling through the cold abyss of space.

Captain Graves makes it clear at the conclusion of this doomsday celebration that he does not come in peace, and he sure as hell isn’t taking any prisoners.

To expand on his apocalyptic alien manifesto, Captain Graves goes one on one with the GRIM 1 in this exclusive interview.

Tell us about your homeworld, the planet Tumulus?

Well, Tumulus is destroyed now, but she was a cold dark place, with deep purple rivers, almost no sun, and treacherous white mountains. We all owned caldeki; they are very similar to dogs but rideable, and they have multicolored antlers (you’ll see my head dress one day). The Tumulans were cruel people, much like here on Earth. They were always at war, destroying each other, and ravaging the land for what little resources it had. I’ve heard that long ago, it looked much like this planet.

What is “Part II: The Ravaging” about? How does it pick up after “Tumulus Part I: It Begins,” that was released earlier this year?

Part I is about me meeting Saturn 9 and bowing before Varic. I then learn the will of Varic and they make me feel whole.

Part II: The Ravaging is about gaining the power of fire, and my destruction of Tumulus. I’m killing the Tumulans so that we can continue to our next planet. We have destroyed many before yours. It will be your time soon.
The lyrics tell a story if you read them.

Who is Captain Graves?

Captain Graves is the Captain of Saturn 9. We are willed by Varic to consume the worlds of the universe. They care nothing about your lives, and are more than happy to continue this mission. Even though it is eating them every day as well.

Tell me about the visual inspiration of your look? It’s quite a choice.

This is how we go to battle on Tumulus.

What was your creative inspiration for composing your recent music?

Varic is our God, we do everything as they will. I am only inspired by Varic.

You mentioned a Part III on the horizon. Can you give us a glimpse of what is to come?

I’ve been writing a log of the planets destroyed. Part III is the last part of the chapter Tumulus. It takes place after I have destroyed Tumulus and I am floating in space waiting for Saturn 9.