My trip to Maryland Doom Fest in June 2019 was a journalistic adventure as well as a musical one.  A highlight was talking with members of new Maryland band Spiral Grave, who played at Guido’s Speakeasy on Friday, June 21st.  Introduced to the band by photographer Julya Brown, I talked separately with vocalist Screamin’ Dee Calhoun and guitarist Willy Rivera on a stoop across the street from Guido’s the day after their performance.

With three out of the four members having been part of Iron Man’s most recent lineup — a long-running underground Maryland doom band formed in 1988 by late guitarist Al Morris III — The Scene has high expectations for Spiral Grave.  Both Dee and Willy said, however, that the band is not trying to fill the proverbial void left by Iron Man.  (Seems like a wise take on the situation, given that Morris was Iron Man’s driving force.)  Rather, Spiral Grave has started “from the ground up,” with a CD single just released on Connecticut’s Salt of the Earth Records and a growing list of successful shows under their belts.  Read on to hear Dee and Willy’s thoughts on Spiral Grave’s progress thus far, as well as some other artistic endeavors they’re involved in… 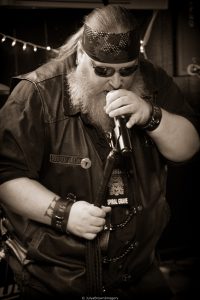 Tell me about how the band got started.

Spiral Grave came out of the ashes of Iron Man.  Three of the four of us were in Iron Man when Al passed and I was doing the solo gig, and Lou (Strachan) plays bass with me in that…. I guess it was late last summer…  Willy Rivera from Lord…  Lord had just disbanded and I had done a track on (Willy’s) solo album last year and he described it as “doom meets Dehumanizer.”  Me being the huge Sabbath fan and the huge Dio fan and Dio influence vocally, I was all about that.  He was starting this from the ground up.  I said we need a rhythm section, and immediately thoughts went to Lou and Mot (Spiral Grave and former Iron Man drummer Jason “Mot” Waldmann).  We got everybody aware of it and I was dealing with some things at the time, so the three of them started rehearsing together and writing songs.  Then I would write lyrics and record at home — so when we finally did get together as a foursome, we were able to hit the ground running.  We started recording earlier this year and started gigging out in March.  We played Maryland Doom fest last night, we played New England stoner and Doom Fest in May….  Other gigs here and there.  The response has been phenomenal.  There’s a pedigree embedded in this band because of where we all came from, but we’re not trying to ride that. This is in no way shape or form a continuation of Iron Man.  It’s something brand new and people get it.

Are you guys working on an album right now?

We’re releasing a two-song — I always love this contradiction in terms — a two-song single on July 6th at the Depot in Baltimore.  Two tracks, we have four other tracks recorded, gonna record two more and that will be our full-length, which we anticipate probably the early part of next year.

Julya tells me you’re an author as well…

I’m hearing fiction, is it horror-inspired?

The first book definitely, very Tales of the Crypt-esque, twist ending, kinda Scary Stories…  Jesus, Devil, Deed, the novella, is more dark fantasy — it actually sprang from a song on my second solo album.  I wrote the song and thought, “There’s more to this, I need to flesh this out all the way.”  It’s about a good man who’s led a very good, virtuous, decent life and his life has basically gone to hell.  He decides being good has not worked.  He enlists the Devil — or more like the Devil enlists him — to petition Christ for his soul back so he can sell it to the Devil.  It’s sorta a modern “Crossroads” feel.  There has been an interest in doing a short film version of that too.  I’ve written a screenplay adapted from the novella… I like to keep busy. 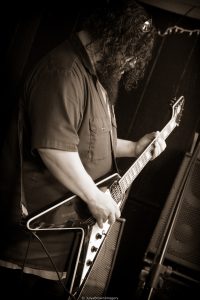 Last night we played I think our eighth show…  It’s taking off!  There’s a lot of hype behind it obviously with the pedigree of the people who are in it.  There are a lot of members of Iron Man, and I was in Lord and Old Scratch before — so anyone who was into those bands is going to take interest.  It’s just a matter of living up to that and hopefully exceeding it.  But it’s been great so far.  Nothing but positive feedback.

Has it been weird with the pressure of the old bands?

A little bit…. I think a lot of it initially on my end was basically I’m playing with three fourths of what used to be Iron Man.  The guitar position being filled by myself was held by Al Morris, who is a legend in the genre — so me stepping into those shoes, I went into it with a conscious effort to not try and replace anybody, to just bring my own thing to the table.  That’ s why instead of calling it Iron Man, we just decided to call it something brand new and not have any expectations beyond what people are gonna have anyway.  Just all new material, all new songs, and start from the ground up with something brand new.

Honestly, I write everything on acoustic guitar, just fiddling around in the bedroom and then I’ll start piecing things together that to me sound good.  It’s just a process of finding the right things  in the right key and putting things together in some kind of rough arrangement.  Once I have that, then I’ll bring it to the practice space.  […]  Once Lou, Mot, and I have something there, we’ll make a rough demo and we’ll send it off to Dee.  Dee will usually already have lyrics in mind, the guy’s got like an encyclopedia, like War and Peace of lyrics.  [laughs]  It’s just a matter of putting it to the right piece of music.  So it usually moves pretty quickly.  […]

Dee was saying you guys are getting a good response…

Yeah, it’s a great response.  We got added onto this at the last minute, literally like two weeks ago.  And we were like, “YES.”  And they were like, “Well, you’re gonna be opening, it’s gonna be at the side stage at Guido’s” and we were like, “Whatever, as long as we get to play.”  I wasn’t expecting a whole lot because we were going on at the same time as Backwoods Payback, who we’re buds with and they’re a great band — so it’s like, well people are gonna be over there checking them out, they’re not gonna hang out for us too much.  There were like ten people in front of us when we were setting up, tuning, and then when I turned around the room was packed.  I was like, okay now it’s just a matter of keeping those people in here…  [laughs]

You guys were up in Connecticut recently, that’s my home state!

Oh, awesome!  Yeah, we were up there for New England Stoner Doom Festival, put together by Scene Productions and Salt of the Earth Records.  Scott Harrington (founder of SOTE) was cool enough to get us on there, he’s putting out our debut single which is out July 6th… That was a huge win for us to get to play that and get that kind of exposure. All the bands that played there were phenomenal bands.  […]  At that point, that was maybe our fifth show.  It was great, the room filled up… I couldn’t have asked for a better situation.

Julya was telling me you were also part of a documentary about musicians and mental health….

Bruce Moore had done a documentary that we were a part of I think two years ago with my old band Lord.  It was called Metal Missionaries — a documentary about how religion factors into heavy music.  Dee had actually done the narration for that documentary, so that was a cool “six degrees of Kevin Bacon” kind of thing.  [laughs]

So Bruce was gonna do a follow-up documentary to discuss after the rash of suicides in the music community, with Chris Cornell and Chester Bennington and Jill Janus the singer of Huntress — I think he really wanted to discuss that subject because it’s a “news blip” and then it gets swept under the rug.  I had issues with depression when I was younger and dealt with it well into my adulthood, so it was something that I had my own point of view on.  It was a cool opportunity to be able to talk about something that was very personal to us.  I was able to read lyrics to him from my solo project Absent Sky, which deals a lot more with depression, anxiety, addiction…  The darker side of the human spectrum, y’know?   That’s supposed to be coming out pretty soon, and Dee was also featured in that.  It’s called Metal Health.

It’s really cool that Bruce is doing that because nobody really talks about (mental health), it’s like a taboo thing — and it’s funny that in a genre that’s meant to tackle taboo subjects…. When the reality is grimmer than your fantasies, nobody wants to talk about it.  The saddest thing for me is that you’re talking about the culmination of somebody’s life, and it’s a news blip on Metal Sucks or Metal Injection or whatever, and then it’s gone.  Those kind of things always get me really hard because you can relate to that if you know how it felt.  It almost feels like it’s forgotten as soon as it’s done — which only proves what they were feeling it they feel like they didn’t matter.  Anyhow….

Well it should be an interesting documentary….

Yeah, he was able to get a lot of other guys from notable bands to come in and speak about their experiences and some of the interviews were really visceral and intense.  It’s not meant to be a comfortable subject so I think the fact that the filmmaker kept it raw was really cool, at least from the footage I’ve seen so far.  I’m honored to be a part of it. 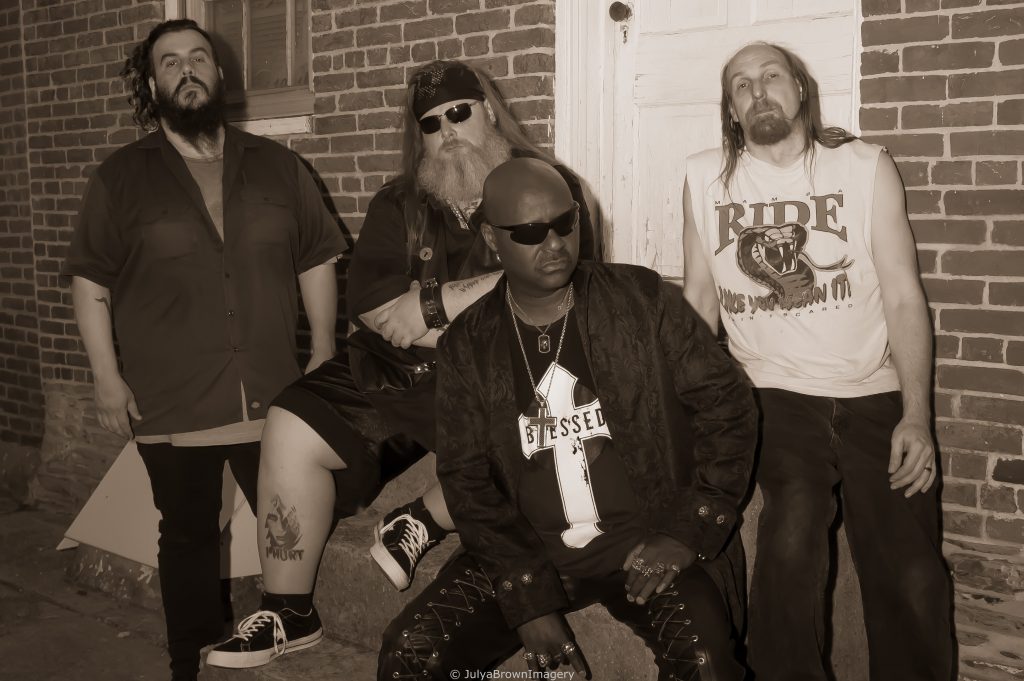