Jeff Apuzzo, vocalist of brutal Connecticut metal/hardcore outfit Dread These Days, shares a thoughtful ode to his battle vest…  The editor suspects many readers will find his sentiment of “adulting on the outside and metal on the inside” highly relatable.

My vest.  Where do I even start?!?  It’s the single piece of clothing that still fits me that I have had since high school…  The piece of myself that despite how much time has changed all other aspects of my life, time reverts but stays the same when I put it on.  I don’t wear it as much as I used to by any stretch, but I still put in on and endeavor to wear it more again still. 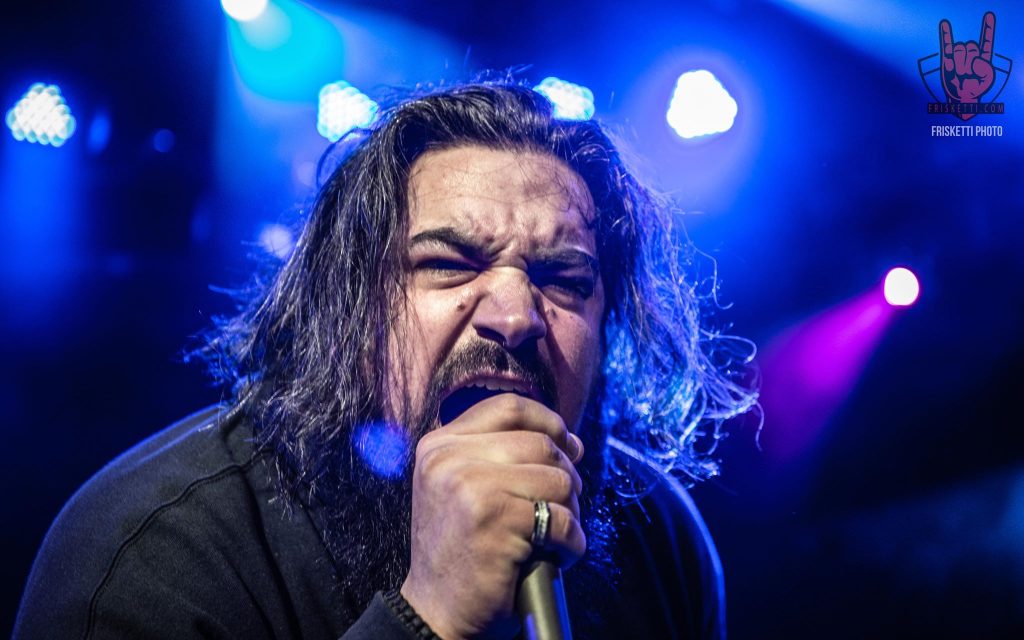 Jeff Apuzzo performing with Dread These Days at Toad’s Place in January 2019.

It shamefully sometimes feels like it has become a costume nowadays whenever, as if I’m trying to reach back to the “glory days” much like a high school football star views his old uniform when he comes home from selling used cars.  In reality, that couldn’t be more further from the truth.   Unlike Mr. Used Car Salesman’s former uniform, my vest represents a piece of my past and a piece of my current self.  Is it a costume now?  FUCK NO.  My vest represents the part of me that will NEVER grow old.  The former football star may grow old and get heavier like I have, but he can’t pop that jersey on and get back in the game right away. I can! 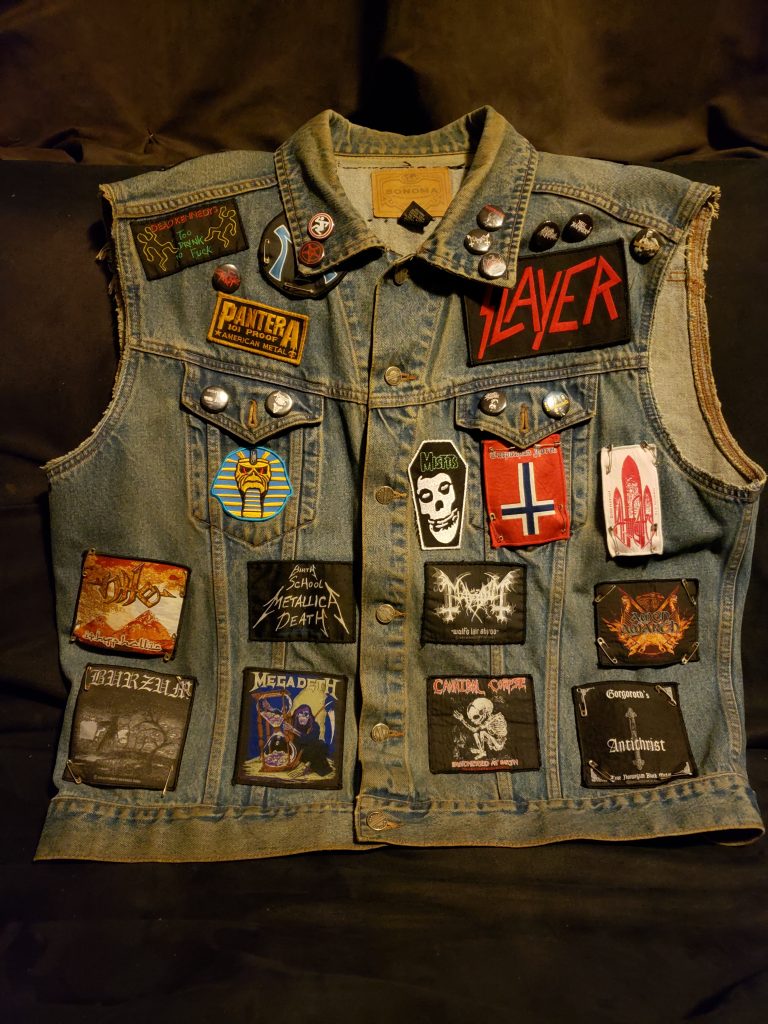 Metal and vests and jackets are timeless.  I actually recently started updating my vest some months ago, adding more patches to try and complete my wearable show-off puzzle that is my musical (and other) tastes — but it feels strange adding to it, so my progress has been slow… I bought my vest as a high school student around 2000, to make and emulate the vests I’d seen my musical idols at the time wearing.  It started out as a size large denim jacket, but the first thing I did when I brought it home was cut the sleeves off it.  I knew it was going to be a vest the second I laid eyes on it in whatever store I bought it from!  I knew what it was going to represent and I know what it still represents now. It represents a spirit that will never get old. It represents a feeling. It represents all the memories I have had while wearing it to countless shows that I have attended and played while wearing it. 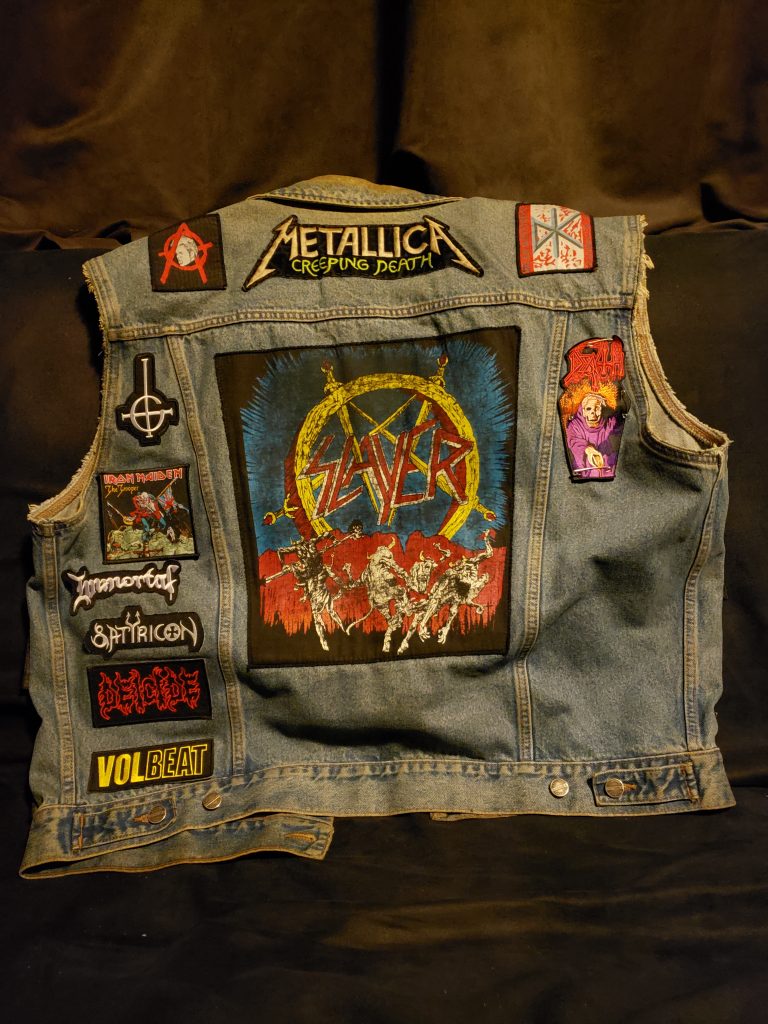 I want to be buried in my vest.  Seriously.  It’s one of my most prized possessions. Something I cherish. Something I built.  Something I will never cease to love.  I literally have blood and sweat in my vest, literally.  The patches are the pieces of the puzzle that hold the vest together and everyone has different pieces that fit their puzzle.  Any jacket or vest built has pieces that we don’t give a fuck about what others’ opinions are.  It’s not their vest.  It’s OUR vest.  It’s OUR patches.  It’s OURS, and we can do with it as we wish.

I look forward to adding to my vest still, though it’s strange seeing these brand new patches on my vest for the first time in years sticking out against the weathered and battle-tested patches that have been on it for the better part of two decades. I look forward to watching these new patches get beat up, worn, and faded like the ones they initially joined.  I don’t look forward to jabbing myself in the fingers with the sewing needle much, but it’s another part of me that becomes the vest and will forever remain a part of it.

So as far as my vest goes, I found a place to start the discussion… This isn’t the end, though!

Jeff will be reporting and photographing “at large” for Alternative Control’s Show Me Your Patches series.  If you see Jeff at a show, show him your patches!  Jeff is also known in the Instagram community for his haunting cemetery photography — be sure to follow @thejeffdeath!

…and show off your battle vest at the New England Stoner and Doom Fest Pre-Party Bash, Thursday May 2nd at 33 Golden in New London!  Alternative Control, Salt of the Earth Records, and SCENE Productions will be hosting a battle vest contest with a prize pack from SOTD! 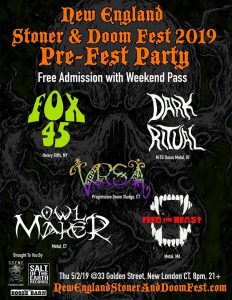