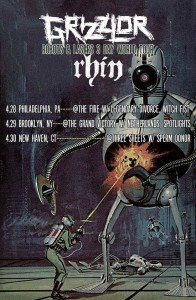 RHIN hails from West Virginia and plays a style of loud rock that that combines your favorite riff rock band’s, well, riffs, played with the attitude and aggression of noise rock. They are about to release a new album, Passenger, on May 6 through Philadelphia’s Grimoire Records. They are also undertaking a mini/weekender tour with one of Connecticut’s best noise rock bands, Grizzlor. That tour will see these two bands play Philadelphia (April 28), Brooklyn (April 29) and New Haven on April 30 — at one of my favorite venues, Three Sheets. Sperm Donor will also be on the New Haven date.

So with all these coming up, we thought we’d send Dom (bass,vocals), Tucker (guitar) and Ben (drums) a bunch of questions pertaining to some of the topics mentioned above, as well as a few others.

And remember the New Haven date is FREE, which means more money for merch, beer and food.

How is your new album Passenger different from your previous release, Bastard? How is it similar?

Tuck: I feel like Passenger is definitely more representative of us as a band. We’ve been in transition since we started — from playing some of Dominic’s previous band’s tunes, to figuring out our own sound, to finally nailing it down with this one. I love a lot of Bastard but this new record is “us.”

Ben: RHIN definitely has a distinct sound. It’s a sound that we’ve had since the beginning but also one that we’re continually developing. I think Passenger is the latest recorded example of where RHIN is. Which is, hopefully getting better as a band and getting better at writing and playing our songs.

What made you decide to basically record it live in one take in the studio? What were you aiming for?  Did you achieve it?

Tuck: We’ve always done that. We’re all kind of weird, anxious dudes, so I think if we had to individually lay everything down that it would be a hassle. Noel (at Grimoire Records) is all about recording bands in their comfort zones. He just comes to our basement and we basically treat it like a rehearsal. It’s much easier that way, and plus it captures how raw and stupidly loud we are.

What were you trying to convey with the lyrics on the new release?

Dominic:  I’m not sure what I’m trying to convey other than using my vocals to help round out our sound.  Its just another instrument.  To be honest I don’t spend a lot of time on the lyrics, I figure you can’t really hear them anyway.

What is the loud rock scene like in West Virginia? How would describe it to an outsider?

Tuck: Everything musically in WV ebbs and flows. There are either too many bands, or not enough. There are only so many good spots to play in our state, and by that I mean like three total, so any band that tries to really do anything is forced to tour often and early. I think that builds strong character in bands from here, not to mention it makes us all play harder and better live. Some notable heavy bands from WV that we pal around with would be Karma To Burn, Rat Ship, Nagato, Horseburner, and Iron Jaw Guru.

Ben: I think people that come up in a place that isn’t really known for having an abundant and/or amazing “scene,” circumstantially create their art/music with purer intention and stronger conviction. I lived in NYC for a while and while there’s obviously tons of great bands there, there’s also this flashy/fake/competitive side that I really cannot relate to. People don’t move to WV or Western MD or Baltimore to be rockstars. Motherfuckers out here do it for the love.

What do you like more, playing live or recording? Why?

Tuck: Dear lord, playing live. Absolutely. Why? Because nothing feels better than playing live music that you love with your buds.

Dominic: Yeah, live is where you get to see if songs work.  I had a great time recording this past time and felt more comfortable.  My favorite part is writing songs, just down in the basement working out ideas.

Ben: Live for sure. Recording is pressure.

After this small run with Grizzlor, are there plans to do more extensive touring once the new record drops?

Tuck: Totally. We have a two week jaunt lined up starting at the end of May with our friends Rat Ship from Huntington, WV. We recently self-released a split cassette with them, plus we’ll have the new Grimoire full-length by then.