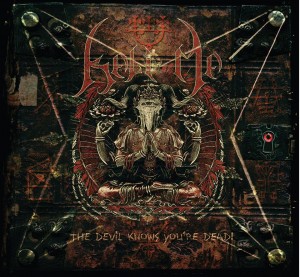 Instrumental metal powerhouse Kali Ma released their long-awaited second studio album The Devil Knows You’re Dead on March 29th, 2014 to an enthusiastic crowd at Cook’s Cafe.  Their CD went right into my car stereo on the ride back and it hasn’t come out since.

“Taking the Crown” is one example of the awesome build-ups Kali Ma creates in their songs.  They seamlessly transition from fist-pumping chugs to Gothenburg-esque arpeggios and then let go in an emotional bridge where a single-note guitar line sings over the fray — and then right back to the fist pumping.

Fifth track “Bezaras,” a Hungarian word that means restraint or closure, features guest violinist Kaia Padersky of Little Ugly.  My husband and I had a drunken debate recently about whether synth strings on a recording are discernible from someone playing a real stringed instrument; if we ever talk about this again, I’m going to turn on this song.  The range of musical colors that can be created with a slight change in vibrato or bow pressure cannot be replicated by a fucking keyboard, argument won!

I thought that “Bezaras” was an intro because it flows so well into “Epimetheus,” but the fifty-second song stands on its own.  “Epimetheus” is another one of those epic builders — one thing I love about this track is that bass line takes off in its own direction for a bit, in counterpoint with the guitars.

Maybe one day Alternative Control will do an “exclusive interview” with Kali Ma members to find out why they never decided to get a singer.  In the meantime, though, the lack of vocals doesn’t detract from the listening experience; if you play the album over and over again in your car like I did, I think it actually adds a new facet.  I could make up my own little scenarios and pictures in my head without some dude doing dying-pig squeals or yelling cheesy things about how he “tried so hard.”  On the other hand, if Kali Ma got Trevor Strnad or Mikael Akerfeldt to join their band, it might be cool to having singing — but since that ain’t happening, let’s leave well enough alone.

In the absence of lyrics, Kali Ma uses their song titles to get ideas across.  For instance, the final track “Penumbra” is a delicate acoustic guitar number whose the title means “the region (of a shadow) in which only a portion of the light source is obscured by the occluding body.”  That’s deep, bro.  And Epimetheus, the namesake behind the sixth track?  He was Prometheus’s twin brother, who was “responsible for giving a positive trait to every animal” – thanks Wikipedia – and gave everything away before he got to humans.  If we ever do that exclusive interview, we’ll ask the guys about the meaning behind “Dewmqueef”…

Kali Ma wrote the songs on this album with forethought and purpose, and it shows.  The Devil Knows You’re Dead is a no-brainer addition to any metalhead’s music collection.