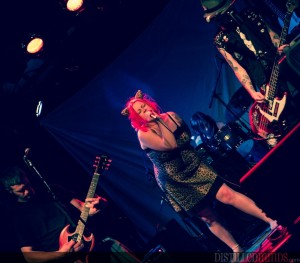 This article was over six months in the making.

Allow me to explain.  As is the case with many of the writers for this site, I am in a band.  I wasn’t from December-February of this year and got the best birthday present ever when our drummer texted me on my birthday to ask if I was interested in getting the band back together.  I replied, yes, I was, and told him how much I missed him.  Since then, we have been busting ass practicing, writing new songs, and trying to be the best band we can be.

I once mused aloud that being in a band was a lot like “having the three husbands you never wanted —  plus, you’re business partners.”  Not that small-time local bands have much in the way of “business” – but you sit around and look at the “band fund” and make fun decisions like when and where to buy stickers and t-shirts or whether or not that Taco Bell on the way back from a show in Hartford is a legitimate band expense or you need to man up and pay for that chalupa with the money you made doing whatever you spend your days doing, as opposed to pretending you were the second coming of (insert name of musical idol here) for forty-five minutes.

I realize that paragraph makes it sound like being in a band sucks, and I want to say that 95% of the time, that’s not true.  Who hasn’t dreamed of getting on stage and having people actually clap when they played an instrument or sang a song they wrote? I’ve been lucky enough to be able to do that. And yes, sometimes, people even do clap.  It’s a feeling that is hard to explain, especially if you’re me and you came very close to losing it all.

There’s no need to drag my personal life (which is much better now, thank you) out into the open, but let’s just say everything came to a head when I missed a show.  I became, overnight, a significantly less talented or influential Axl Rose.  And I pretty much didn’t leave the house for two months, other than to go to work. I am pretty sure I saw my best friend twice in that period, and that’s about it.  But here’s the thing: sometimes you have to hit that point to realize what really matters.

After a few months of being back together, we decided the time had come to book a show.  We booked June 21st and the goal was set. We had to be as good as possible. We had to kick ass. And I had to get up on that stage and make it happen.  There was no turning back.  Was I anxious? Didn’t matter. Were my hands shaking? Too bad. There was a piece of paper with 15 songs on it and I had to sing each and every one. And so I did. And WE, as a unit, blasted through our set.

You know what? It was fun.

After we were done, we had a frenzied rush to move our stuff off the stage, and two of us sat next to a brick wall outside, exhausted, sweaty, and proud. We did it. And we’re going to do it again. And again. And a bunch more times after that.

I’m lucky that we’re able to keep going, and I’m lucky I got a second chance to redeem myself in the eyes of my band and redeem my band in the eyes of the people in “the scene” (whatever that is – we’re kind of the only punk band around here, but we find our way to hang with the metal bands, anyway).

Hope to see you at a show….