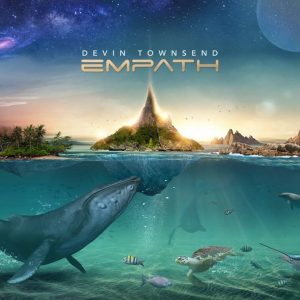 It’s been almost two years since Devin Townsend released what was to be his last album under the Devin Townsend Project moniker, Transcendence. Although I enjoyed that album a great deal, Mr. Townsend had gotten himself stuck in a formula that he seemed incapable of escaping from. It was most likely due to pressures from management to keep consistent a progressive, arena-metal sound that had proven to be a financial success. I was overjoyed with Devin when he decided (as every daring artist should) not to compromise his artistic vision and disband the Devin Townsend Project. He’s freed himself once again from the constraints of a “band” format, heading into a phase of reevaluation and experimentation that seems to happen every ten years throughout his musical career.

Basically, Empath is Devin refusing to choose one musical path to express his ideas. The album is a complicated statement, using a vast array of color and bombast to convey a loosely strung-together concept of anti-suicide. It’s a medley of genre-bending, cycling through all of Devin’s past musings in death/speed metal, musical theater, orchestra, ambience, pop, folk, prog rock, and the avantgarde. There are also a few new forays into reggae, spoken-word, and jazz, adding to the immense checklist of musical styles Townsend has managed to adopt. Yet Empath isn’t a random shuffle through audial schizophrenia. These genres manage to play nice with each other, allowing each their own chapter in the Empath epic. A full-scale orchestra and choir don’t drown out gentle keyboard electronics and acoustic guitar from these deeply layered compositions, thanks to Townsend’s impeccable and panoramic production.

There’s an incredible amount of music to digest in 74 minutes. I can almost promise that Empath won’t reveal itself on first listen. It was only after a few run-throughs that I began to fully appreciate the woodwind majesty fluttering around the background of “Sprite.” It took awhile to link up with the infectious funk groove of “Borderlands,” being that the song pulls the listener in and out of ambient comedowns and wacky voice samples. The 23-minute “Singularity” is the longest song Devin has ever written, and it comes at you as if it’s EVERYTHING the man has ever written in highly-compressed form. “Singularity” is cinematic emotional release, Zappa-esque cyber metal insanity, blistering heavy metal brutality, and hippie-dippie universal love sentiment all in one. It’s a wild ride that I don’t think I’ll ever understand, and I don’t need to.

Like much of Devin’s music, this album likely won’t recruit new listeners to his discography. Most of the complaints I’ve heard about Empath are from people that succumbed to the hype and decided to give Devin a first-time try. This is an uncompromisingly intense musical statement – the most “Townsend” album Devin has ever made. I’d like to share a word of warning for those unaccustomed to his music: It’s loud, overblown, extremely forthright in its emotional identity and perhaps insufferably confident. No matter what Empath is doing, it hits you at maximum level. It’s really fucking violent, then really fucking cheesy, then really fucking weird, then really fucking beautiful. Even the relaxing, super mellow moments in the madness wash over the listener with an intense tranquility.

For those of us who are already a fan, I can’t imagine how Empath would disappoint you. It’s a rare thing for an album to scratch every musical itch while keeping a cohesive spirit in place. This is a multicolored masterwork of artistic fearlessness and loveable flamboyance. I can’t see myself ever getting tired of it.

Album of the year…for now!