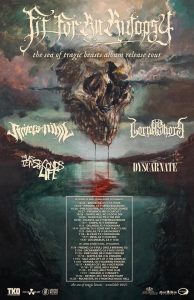 Have you ever walked into a venue, had a look around and wondered for a second how it will still be standing by the end of the show? Such was the case entering The Space which, for those unfamiliar with Hamden’s little secret, is a tried and true venue nestled in the Connecticut suburbs. While many shows have graced its stage, Fit for an Autopsy brought some of New Jersey’s heaviest hitters with them on the second day of their album release tour.

As the venue walls shook from the intensity of the tour, which included Rivers of Nihil, Lorna Shore, and Cognitive, Alternative Control was excited to be On the Front Line on home soil!

Originally occupied by up-and-coming thrashers Dyscarnate, ongoing visa and customs issues kept the U.K. based trio from the opening slot of the show for the first stretch of dates. Stepping up to fill in was Jobbstown, New Jersey slammers Cognitive. With probably no more than a day’s notice to prepare for the tour, the quartet gained audience approval through a barrage of crushing breakdowns and speedy staccato riffs reminiscent of The Red Chord and Job For A Cowboy. 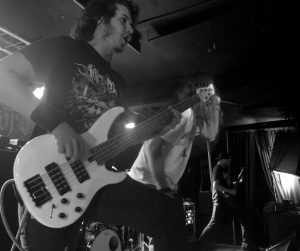 Hailing from about two hours up the Jersey Turnpike in Warren County, Lorna Shore had the crowd literally leaping over each other before their soundcheck was finished. Clearly still rolling strong since their appearance at this year’s Summer Slaughter Tour, the band tore through fan favorites “Flesh Coffin” and “FVNERAL MOON.” Aiming to set the bar higher than ever, fans were treated to a brand new song, providing a taste of the incredible opus still to come. 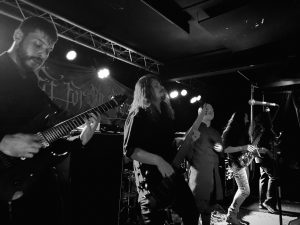 Recounting Alternative Control’s declaration that Rivers of Nihil “might very well be extreme music’s next sensation” back in August, the months since have only further supported this statement. 2018’s Where Owls Know My Name reached number 61 on the Billboard 200 and was voted number nine on MetalSucks’ 25 Best Metal Albums of 2010-2019, edging out albums by Meshuggah, Mastodon, and The Dillinger Escape Plan.

Taking on an audience perhaps a bit less familiar with progressive tech-death, the gnashing grooves of “Soil and Seed” hooked fans of heavy instantly. In contrast, fans of Between the Buried and Me came to the front of the line for spacier cuts “Subtle Change” and the title track of 2015’s Monarchy. However, it was once again the soul gripping track “The Silent Life” that left the audience speechless, driven by the performance of touring sax player Patrick Corona. As the only act of the night based outside the Garden State, Rivers of Nihil demonstrated their wide range of influences, passion for the extreme, and potential to take their act to the next level.

Closing out the night, Fit for an Autopsy were barely twenty four hours out from their sold out album release show at Brooklyn’s Saint Vitus. Still red hot with energy from the night before, things kicked off fast with the title track from The Sea of Tragic Beasts. Releasing a music video for the song at the end of August, the crowd had ample time to learn the lyrics and when to brace for impact in the pit.

With a setlist spanning five albums, it was not until four songs in before anyone had a second to catch their breath with the opening of “Mirrors.” Enduring the merciless force of “Do You See Him?,” voices rang out in unison for “When the Bulbs Burn Out” off 2017’s The Great Collapse before the beatdowns returned with “Warfare.”  Closing out with a gauntlet of four tracks from The Great Collapse, including the Gojira-esque “Heads Will Hang” and the head spinning “Hydra”.

As Connecticut venues steadily make a comeback by bringing national acts back to local stages, The Space held fast in the face of a Friday night of brutality; here’s hoping to see these and other bands visit more often. Be sure to head to your favorite record store to pick up a copy of The Sea of Tragic Beasts!