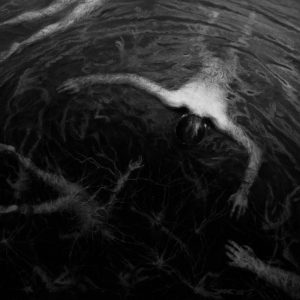 I don’t think I’ve ever reviewed a band based out of Spain. I always enjoy covering music from a part of the world that I’m not familiar with. I have preconceived notions of what a Swedish metal album will sound like, or an Icelandic electronic album, or Japanese noise rock. All I knew going into this was that Altarage was a Spanish death metal band. I welcomed whatever geographical surprises may spawn.

But here’s the thing with heavy metal compositions this dense, sinister, and inaccessible: the void is internationally expressed with uniform reverence. It doesn’t matter where music like The Approaching Roar was recorded. Geographical identity is moot when dealing with such nihilism. Despite stemming from varying locations, bands like Sunn O))), Ulcerate, Portal, Deathspell Omega, and Leviathan all share similarities in the droning, encompassing, study of fear. Add Altarage to that list.

The Approaching Roar is convincingly diabolical blackened death, with a production value that reminds me of a more dynamic and less murky Portal. It’s a linear album that doesn’t feel like a riff collection, more like a swirling chasm of sound. A song like “Knowledge” gives the illusion of scathing oil entering in and out of the ears. The listener’s headspace is kept just above the black waves, but close enough to the waterline to keep a constant threat of suffocation.

This album soaks in a relenting/resistance type of anxiety. If we can assign personification to the mood here, we create a character on the fringes of a terrible afterlife. Sometimes he “resists” and pulls against the inevitable void; blast-beats and blistering riffs on “Hieroglyphic Certainty” churn up a great deal of desperation and terror. Other times, the character “relents.” Exhausted from struggling against damnation, he gives in to the void and allows the vacuum to fill his lungs. Slower tempos and greater ambient space in a song like “Urn” illustrates this. “Cyclopean Clash” presents both sides of the conflict. Dizzying swells of panic lead into a two-minute, dejected fade out that gradually expires.

There’s no light or hope. Even when the cacophony eases from time to time, we’re still left with abstract, indifferent monologues from the void. The minimalist break in “Chaworos Sepelln” is a wordless lecture on death without meaning — a glimpse into an atheistic future. The jagged and towering monolith of riffs that follows is like a spiritual crisis. It turns out we’re but microscopic food for the universe.

Altarage is for those extreme music listeners with a taste for the avant-garde. The music here is dissonant to the point of being a depression trigger, and atmospherically grandiose. The blackened death influences are clear and the album’s length is modest enough to make it a good introduction to depressive, experimental metal for those who dare. It’s quite a strong statement, and I’m looking forward to hearing more from the band.