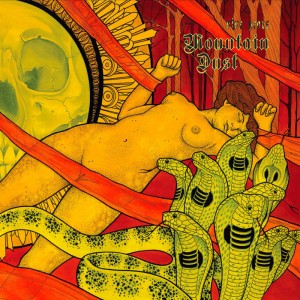 “You don’t know what I mean,” wails Brendan Mainville in Nine Years‘ opener “Evil Deeds,” “when I tell you I’ve been wishing for death.”

Quebecois stoner rockers Mountain Dust released their first full-length album this July, and man is it heavy.   A psychedelic wash of organ and guitar, Nine Years is blues to drive your car off a bridge to.  Alternative Control talked with a couple members about the band’s history and the making of this album, about “what is and what could have been.”

All I know about Mountain Dust is that you’re from Montreal, you’re music is awesome, and Kevin Keegan from Dead Quiet (ex Barn Burner) used to sing for you.  Tell me the rest of the story.

Brendan Mainville: It kind of started as just a hangout project between Kevin and I — sitting around with acoustic guitars, swapping riffs. It became a weekly affair and eventually we thought it was a good idea to get a full band (Hal Jaques and Blair Youngblut) together.

After a while Kevin moved back to British Columbia and we were extremely fortunate to be able to snag Pat Bennett.  From there we had to start from scratch.  Instead of two vocalists and two guitars, I was on full time vocals and Pat was rocking lap steel and organ. It really changed the dynamics and forced us to move beyond what we were doing with Kevin.  Not that we don’t miss Kevin every day, but it’s just the way the rock rolls… And it’s rolling real smooth.

Nine Years shows a progression from your 2013 demos in terms of song arrangement, instrumentation… What was the songwriting process like for this album?  Who plays cello and brass on “Lonely War”?

BM: For the most part I write riffs or songs at home and then introduce it to the band. Then Hal, Pat, and Blair make them really, really good.

Pat plays the cello (and) Hal’s on the brass.  Another thing that was great about recording “Lonely War” was getting everyone to sing on it.

It’s easy to imagine who some of your influences might be, but your music doesn’t sound derivative. What do you think makes Mountain Dust able to walk that fine line so well?

BM: I think it has to do with the fact that at the end of the day, we’re just playing rock music. There are never moments where someone objects to a part in a song because it’s “too bluesy” or “too metal.”  It only ever comes down to the age old question, “Where’s the riff?”

In terms of influences in my songwriting, it can come from everything ranging from Cat Stevens to Harkonen all at once.  It can come from obsessive thoughts running through my head or from a scene in a movie.  Sometimes it’s just a ringing in my ears when I’m trying to sleep that shapes into a melody.  The influence is really all around as opposed to in a specific band I like or a particular song I hear.

Tell me about the ideas behind Nine Years‘ trippy album art.

BM: It’s heavily based around the lyrics of our song “Dead Queen,” and Travis Driscoll was the perfect artist for it. He did an incredible job depicting not just the scene described in the lyrics, but the tone of the whole album as well. The lyrics in question, as well as the rest of the album, are on our website, http://www.mountaindustofficial.com.

What is Montreal’s music scene like?  Because between bands like you guys and Dopethrone, and festivals like Heavy Montreal, it seems pretty awesome from where I’m sitting…

Hal Jaques: There is a great creative vibe in this city.  I think artists from all disciplines are drawn to Montreal for the cheap rent and the bustling nightlife.  There are always great new bands popping up, with lots of venues of all sizes.  Montreal, like any city, definitely has its preferential musical styles that fans will gravitate towards, so it’s obviously important for most bands to move beyond the city limits – especially bands that don’t fall into these preferred genres.

Does Mountain Dust have any tour plans in the works?

BM: Nothing in the works yet, but there’s some loose talk of going to Europe.

What do you guys do when you’re not playing stoner rock?

HJ: When we’re not playing stoner rock we work our regular jobs, thinking about what is, and what could have been.  Will people be moved by our music in the years to come?  Can anyone relate to it now?  Should I have started a family 10 years ago?  Is the art we create just a way to stroke our own collective ego, or are we helping people connect to their emotions, thus actively helping our communities cultivate a more intense and rewarding life experience?  If art is really just a personal outlet for human emotion, is Brendan gonna be OK?  If there’s a gig in the forest, and nobody is there to rock out, does it still rock?

We ask the big questions, and we rarely get answers.