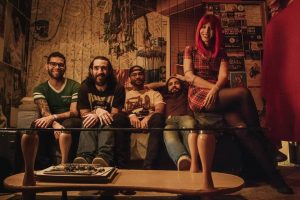 San Juan stoner/progressive metal act Moths embark on their first mainland United States performances this February with a string of shows on the East Coast.  Following the November 2018 release of their debut EP (s/t), the band is looking forward to bringing their music to new audiences.

“We’re extremely excited to be able to perform in the U.S. Mainland for the first time.  Since we got featured as Album of the Day in Bandcamp, we’ve had people from the areas that we’re playing give us great reactions to the EP — and we can’t wait to show people what the Puerto Rican metal scene is all about.  There’s a lot of talent in the Island, especially regarding metal, so we want to encourage people to keep digging on the bands that we got here.”

While the band was affected by Hurricane Maria, which devastated much of Puerto Rico in September 2017, they pushed through trying times to continue their craft.  Their debut self-titled EP was released in November 2018 to international accolades, including being featured by bandcamp as an Album of the Day.

” ‘Desires’ became my favorite song of the EP.  The balance between the stoner and progressive, through the riffs and the melody from these two talented guitarists, along with Weslie’s famous bass and Daniel’s energetic drumming, took me on one of the most intense trips I could have listening to any band today.” — Omar Segarra, Under the Same Shadow