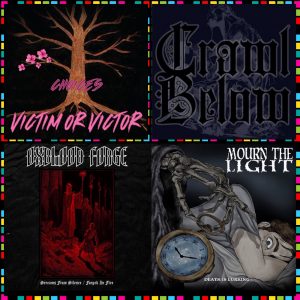 Throughout metal history, there have been places where the right people and the right influences came together to spark a movement.  Tampa Bay, Florida.  Gothenburg, Sweden.  And… Norwich, Connecticut?

It might not be internationally recognized yet, but give the eastern Connecticut doom scene a decade and you’ll be reading about it on Wikipedia.  I first became aware of it when Owl Maker began looking for places to play; living in Stamford at the time, it struck me as unfortunate that the most enthusiastic people about “our” kind of music all lived on the other side of the state.  Over the past couple years, I’ve gotten to scratch the surface of the musical creativity that springs forth from Norwich, New London, and the surrounding area.  The scene out there is marked by a spirit of cooperation and collaboration, and it’s not all doom metal either.  Something in the water?

Whatever it is, a few key players keep churning out material and bringing more people into the fold.  Mourn the Light, whose guitarist Dwayne Eldredge books many local shows and co-founded New England Stoner & Doom Fest, is releasing a split with Massachusetts outfit Oxblood Forge on September 13th.  One highlight on MTL’s side is a cover of the Candlemass tune “Bewitched” with a guest solo by homegrown virtuoso Joey Concepcion.  (This will only be available on the digital version of the split.)  MTL also “covered” themselves with a spiffy piano version of “Carry the Flame” featuring Sean “Orc” Adams on keys.  Oxblood Forge’s tracks show the other side of the doom genre — uptempo riffs with a strong NWOBHM influence and galloping bass that would make Steve Harris proud.  Whichever flavor you like your doom, this split has it.  Come out on September 13th to celebrate the release at Altones in Jewett City, CT.

Another one of those key players calls himself a lot of things, but I’ll just call him Charlie for this article.  In his typical self-deprecating fashion, he describes his latest project Crawl Below as “one man’s mission to combine two subgenres most people don’t like anyway: black metal and D-beat punk.”  And in fact, I like it a helluva lot.  Debut album Welcome The Possession takes the vocal stylings and abrasive production of black metal and combines it with the drumming and songwriting of hardcore punk.  (But those blasts can be “black metal” too, amirite??) This project goes to show that in 20-almost-20, genre distinctions in metal are becoming outdated.  Who cares if your punk has some black metal in it?  Who cares if your doom band has some NWOBHM in it?  We’re all in our 30s and 40s and here to have fun!  In a very grim and kvlt manner, of course…  But back to Crawl Below, Charlie doesn’t sacrifice any of the catchiness of his other bands, Low Moments and Sentinel Hill, for kvltness — this band just sounds a lot more pissed off.

I said before that the eastern Connecticut collective isn’t all doom metal, but it’s not all metal either.  Singer/songwriter Stephanie Lussier, performing under the moniker Victim or Victor, released a full length album in June called Choices.  Her plaintive, soul-baring songs are often presented with only vocals and acoustic guitar — but I once had the pleasure of seeing Victim or Victor as a full band, giving the music whole new edge.  That spirit of collaboration shows through on Choices, with Danny Fleet, Drew Cathcart, and Daniel Jackson (of Casting Shadows) sitting in on some tracks.  But whether there’s a drum set and a line of amps on stage or just a girl and a guitar, Victim or Victor’s songs ring true.

There’s plenty more to examine in this scene than just the bands mentioned above: newcomers Black Horse Rebellion, the latest action over at Salt of the Earth Records…  But it’s getting late and I’ll have to save that for another article.  Until then, check out the New England Stoner and Doom Music, Eastern Connecticut Metal and Stoner And Doom Metal News Facebook groups for music, reviews, and events.  And while you’re at it…. Get on bandcamp and buy some freakin’ music!