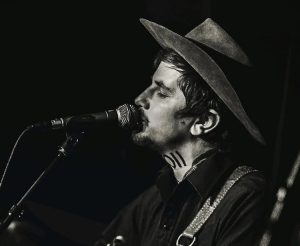 Benjamin Tod, the youthful but hardscrabble co-founder of the Lost Dog Street Band, is releasing his second solo album on November 22nd via Anti-Corporate Music.  The  quiet Americana ballads on A Heart of Gold is Hard to Find, just vocals and acoustic guitar, are full of regret, melancholy, and at times self-loathing.

His lyrics have an easy cleverness about them, like this verse from “We Ain’t Even Kin,” a song about Tod’s non-biological grandfather:

And I begin to explain we ain’t even kin,

He’ll interrupt with “Why bother?”

And saunter away with a sideways grin

What does this wry Grandpa say about Ben’s music?  Watch the video til the end to find out…

Benjamin Tod says regarding the opening track “Sorry for the Things,” “Ashley and I went a few of years getting by on less than $400 bucks a month living on the streets, in ratty vehicles, and off grid shanties. We played music on the streets, did migrant work and a few things that the statute of limitations forbids me to say. ‘Sorry For The Things’ encapsulated those times and the hardships we lived through.

It’s shocking how long I continued drinking when I listen to it. It’s obvious that even back then I understood how badly my addictions were affecting my life, yet it would be almost a decade before I really tried to get sober. I am thankful for the grace she has for me still. I have not been an easy person to love.”

And I’ve been thinking about the highway again.

Oh, but you know, we can’t afford things like that,

Spoiler alert, Benjamin found his way to sobriety (at least he states in the press release that he recorded the album while sober).  Ashley is still with him, playing fiddle alongside him in Lost Dog Street Band.  I wouldn’t recommend listening to A Heart of Gold is Hard to Find while drinking alone, but I do recommend it.  Tod has lived the stories he sings, far-removed from nuclear families and warm houses in the suburbs, and the songs ring true.